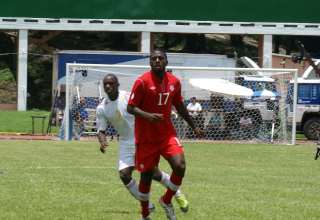 It only took one game, but Canada has already surpassed its point total from this round of World Cup qualifying from four years ago.

Olivier Occean scored the lone goal from a cross from the right side by David Edgar and Milan Borjan had to come on when Lars Hirschfeld was red-carded for handling the ball outside the box with 27 minutes left. Both goalkeepers played assuredly and as a result, Canada now sits on top of its group ahead of Tuesday’s crucial game against Honduras at BMO Field in Toronto.

In the semifinal round of qualifying for the 2010 World Cup, Canada was only able to register single points against Jamaica and Mexico.

“It was difficult for the players today — very, very difficult,” said Canadian coach Stephen Hart. “I think Cuba are going to take points from anybody that they play here. A lot of teams that have a passing game and passing patterns are going to struggle.”

Passing teams like Canada will have a hard time getting going largely thanks to what passed for a field at the Estadio Pedro Marrero — a facility that was built in 1929 and looks every bit its age.

Canadian captain Kevin McKenna said it was the worst pitch he played on in his career and the goal-scorer Occean took that a little bit further.

“I would not know how to describe the field. It’s not even playable,” said Occean. “We came out with a big win and that’s important for us.”

While for those back in Canada, the pitch may have seemed lush and green on television (ed. note: No, it didn’t) — that was largely thanks to any green on the field being crabgrass and weeds. In addition, the field was bumpy making passes played along the ground to hump up at inopportune times.

That field was partly to blame for Hirschfeld’s ejection as the starting keeper admitted afterwards that he was wanted to head the ball to a Canadian defender but that plan went awry when it took a funny bounce in the pitch.

“[The pitch] was pretty dry and holding up everything,” said Hirschfeld. “I came out pretty aggressively and basically looking to play it out to the left back with my head and when it bounced it popped up really high over me. It was a desperation thing.”

Hirschfeld admitted that he was likely a yard or two outside the box when he played the ball.

Cuba certainly does things differently and, as a little aside, electricians were still installing plugs and splitting wires to provide electricity to the radio commentators. Clearly it’s not a stadium that sees much international action.

The other thing that Canada had to deal with was the heat. The game started under overcast skies and a healthy wind so it was nowhere near as bad as it could have been. But when the sun came out, the players were thankful for that training camp spent in Florida.

“These are the things we have to overcome in CONCACAF. We spoke about it a lot,” said Edgar. “We’ve just got to dig in for 90 minutes and then get your rest afterwards.”

Hart, as a native of Trinidad and Tobago, is likely used to the sort of heat that was experienced on Friday. But the site of him wearing a suit on the Canadian sidelines drew some questions after the game.

“The players suffer so I should suffer a little bit too,” said a noticeably relieved Hart.

Borjan admitted he was surprised that he had to come on but at the full-time whistle went to celebrate with the 100 or so Voyageurs who made the trip down. He’ll likely get the start on Tuesday in the
difficult game against Honduras and issued something of a rallying cry to those in Toronto or who can get to Toronto for Tuesday’s game.

“It’s going to be tough to play Honduras,” he said. “We play at home and we want as many fans as possible to come to give us a 12th man and I hope that’s going to happen.”