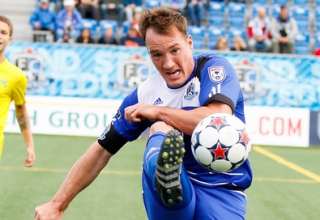 Injured FC Edmonton striker Tomi Ameobi joined us in the broadcast booth for a portion of the second half of Sunday’s game between his side and the Tampa Bay Rowdies. And, jokingly, he questioned if centre back Albert Watson had actually been aiming for the bottom corner of the Rowdies net with his first-half half volley.

Watson’s goal would stand up as the difference; the Eddies beat the Rowdies 1-0 at Clarke Field. And Watson assured us that, indeed, he was looking for the far corner of the goal after he’d beaten his marker and got to Dustin Corea’s corner kick. He put the ball exactly where he wanted to.

“The more I see the goal [on the replay monitors], the more I like it,” Watson joked after the match. “And the more I think I’m wasted as a centre back.”

The Eddies were dominant for the first 30 minutes of the game, finding pockets of space throughout the middle of the park; the Rowdies often sent two players out to double-team FCE’s Lance Laing on the wing, and it left gaps in the middle for the Eddies to exploit.

Daryl Fordyce was left one-on-one in the middle of the park and had his shot partially blocked, which led to Corea’s corner — and Watson’s goal.

At halftime, Eddies coach Colin Miller said that, football-wise, that might have been the best 45 minutes his team has put together all year long. And they did it without Ameobi, who injured his knee in training on Friday, midfielders Ritchie Jones and Thiago de Freitas, and defender Kareem Moses.

Tampa Bay’s best chance of the half came when former Toronto FC defender Gale Agbossoumonde got his head to a Georgi Hristov free kick, but put it over the bar.

But, in the second half, the Rowdies turned up the pressure. They began pressuring the Eddies deep in the offensive half, and were able to turn over the ball numerous times. But, even though the Rowdies had a lot of the ball in the second half, the Eddies were able to defend deep and limit the amount of dangerous chances conceded. Rowdies coach Stuart Campbell admitted he was frustrated that his team wasn’t willing to shoot the ball more considering that it had so much of the ball.

And, on the one occasion the Rowdies did decide to shoot, Juan Guerra’s effort hit the spot where the post meets the crossbar. For Guerra, it was soccer karma coming back to bite him in the keester; in the first half, he launched into one of the most comical penalty-area dives you’ll ever see. So, the soccer gods found a way to repay him soon after his rather embarrassing attempt to cheat.

Daryl Fordyce had a great chance to give the Eddies a two-goal cushion, but Rowdies’ keeper Matt Pickens are a good diving stop to deny him.

“It was a bit nervy in the second half,” Miller said. “We’ve certainly played better football, but we basically shut up shop.

“It was a very professional performance against a very good team from Tampa Bay.”

The Eddies are now two points back of fourth place in the NASL overall standings, which represents the final post-season spot. With the win, the Eddies take the season series against the Rowdies.