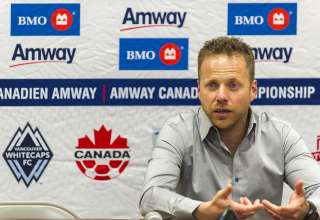 We are working to prepare the autumn issue of Plastic Pitch. And, as has become custom, we prep for the launch of the issue by previewing one of our stories on The 11. We present an abridged version of the Q and A we did with Ottawa Fury coach Marc Dos Santos. He talks about the Ottawa Fury’s rise to the top of the NASL fall standings, the turning point of the season and why he believes the NASL (and not a Canadian professional league) is the place for the Fury to be.

The full version of the interview will be in Plastic Pitch #7, check for it in a couple of weeks time! Until then, enjoy the preview!

What do you think was the turning point of the season?
“It was the week where we were knocked out of Amway and we also lost against Fort Lauderdale. In one week, we had given up nine goals in three games. We had a lot of new players. And, we looked at some of the problems in the way we were playing. There was a lot of humility. It wasn’t about the players in the back, but how we defended as a unit. Our lines were too far from each other. Maybe our players were thinking too much about offence, so we had to go back to our basics. We looked at our four moments of play and what we needed to do as a team. We assessed what was going right, we assessed what was going wrong and we did it with the utmost humility in the locker room.”

Ottawa is at the top of the NASL fall-season standings. How does your mindset change when you’re leading rather than chasing?
“We know what it’s like to be near the bottom of the standings. We know what it’s like to be 10th, to be 9th, to be 8th. Now, we’ve had a taste of what it’s like to be at the top — and not just for one or two weeks, but for four or five weeks or more. I can tell you this: There is no sense of ‘party’ in our locker room. None at all. We all know that we have not accomplished anything yet. We feel that this spot can be taken from us in the space of three games. Three straight losses and we fall right back down the standings. So, we are committed to playing every game like it is our last. We have to approach every game like a final.”

Ottawa and Edmonton (in NASL) are giving Canadian players regular minutes, but Canadian MLS teams aren’t offering the same kind of opportunities to domestic players. How does that change?
“To be very honest, there’s very little the clubs can do about it. Look at the Montreal Impact. They got to CONCACAF Champions League final, and they didn’t put a single Canadian player on the field. But there’s no doubt it was good for the club, no doubt it was good for the city. There’s a lot of pressure on a club president and there’s a lot of pressure on the coach. And while there are some Canadian fans who care about Canadians getting playing time, most of that pressure is based on results and getting that team to the playoffs. So, it’s the Canadian Soccer Association that needs the be the one that sets standard. And I think that starts in the Amway. I think if the CSA wants to, it can set standards, that there has to X number of Canadians on each club’s roster for the Amway, and that each club has to start X number of Canadians.”

Where do you see the club going in the future?
“From day one, we established a model of play for the club. And that did not change no matter the coaches or players we brought in. We stuck to our model of play, even when there were growing pains, even when there were several losses in a row. We believed that, sticking to our vision, we would create the right identity for the club. We’d create the right visibility of the club. And if we keep feeding that model, and by that I mean that we keep improving every day, then there are no limits to where this club can go. When we started off we were playing in front of 1,500 people at Carleton [University]. And, now, the last few games we’ve played in front of 6,000 people. And, if we can make that model strong, it will continue. If I leave, it will continue. If [members of the coaching staff] leave, it will continue.”