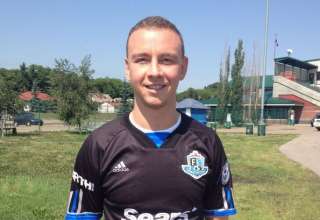 Even though all players don’t have to officially report for their medicals until February 15, Thursday’s training session at Commonwealth Fieldhouse — featuring the Reserves and the available senior-squad members — featured a lot of newcomers and familiar faces.

Goalkeeper John Smits and Scottish defender David Proctor had just returned to the city and were working out. Fullback Wes Knight has been in Edmonton since January; same goes for holding midfielder Neil Hlavaty. Local products Antonio Rago and Shaun Saiko have been regular fixtures at the indoor training sessions since December.

And there could be one new addition soon: Assistant coach Jeff Paulus, who was at last weekend’s NASL Combine in Florida, said there was one French trialist there that caught his eye — and the team is currently in talks with that player’s camp.

There was one key absence from the training session: Colin Miller has just wrapped up his stint as the interim coach of the national team, and Paulus and assistant Angelo Sestito were running the session.

But Proctor is looking forward to playing under coach Miller, who was hired in November.

“Definitely, I know of him,” said Proctor. “I remember watching him (in the Scottish League) as a young boy. He has a a lot of experience from all those years in Scotland, and he still has a lot of contacts over there. He has lots of international experience.”

But Proctor will need to fight for a place in the team. After releasing Kevin Hatchi and Jonathan-Joseph Augustin, the Eddies have picked up Hlavaty, former NASL Best XI defender Lance Laing, Knight, and Canadian fullback Edson Edward. With right back Rago, NASL Best XI centre back Paul Hamilton and the likely promotion of Mallan Roberts from the Reserves to the senior squad, Proctor finds himself in a busy backfield.

“You knew that when they decided to cut the two French players, Kevin and Jonathan, that new players would be brought in,” said Proctor. “But, as a professional, you can’t let that phase you.”