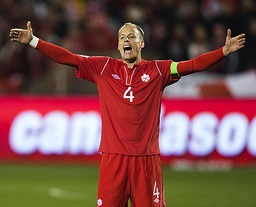 Kevin McKenna has registered an unusual hat trick (of sorts) in the 2. Bundesliga.

With his opening goal in Thursday’s 1-1 draw at Hertha Berlin, the Calgary native registered a goal in his third consecutive game for FC Koln.

McKenna opened the scoring in Berlin Thursday with a headed effort from eight yards out.

The big Canadian defender began the streak with a third-minute goal in a 2-0 win over 1860 Munich. He then kept it going with a marker in a 3-1 win over VfL Bochum. McKenna’s goal was Koln’s second of the game, so, like his strike against 1860, it was the winning marker as well.

McKenna will look to make it four goals in four games when Koln faces Ingolstadt this Sunday.