May 21, 2022
9 New Articles
Home Global Game Europe Cornelius says Herdman has told CanMNT first-timers “not to be scared” ahead of NZ match 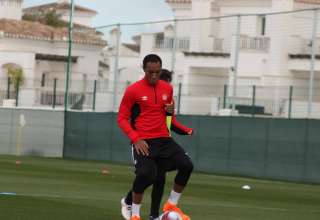 Derek Cornelius was getting ready to go to sleep. He was lying in bed. But, he still had his phone nearby. So he checked his e-mail before settling down for the night. Well, there was a pretty special message waiting for him to open — a confirmation that he’d been called up to his first-ever Canadian senior men’s national-team camp. So, instead of going to sleep, he called hs parents.

This Saturday, Cornelius is one of five players — including Liam Miller, Liam Fraser, Marcus Godinho and recently-nationalized David Wotherspoon — who could earn his first senior cap when Canada faces New Zealand in Spain. It will be the first game with John Herdman in charge of the men’s side.

Herdman, who cemented his reputation as a master motivator as the coach of the double-Olympic-bronze-medal winning women’s national side, has already been working on the yet-to-be-capped Canadians.

“The message in meetings is not to be scared,” said Cornelius. “The first-timers have been told to show our football, to show our individual qualities. John wants the players to express themselves, and not be afraid to make mistakes. With the system John is trying to bring in, we are going to make mistakes. We have to learn to be better.”

And what kind of “system” can we expect the Canadian team to implement under its new coach?

“He wants us to play attacking football, not to sit back and defend,” said Cornelius. It’s different than the style the 20-year-old centre back is used to from his Serbian club side, FK Javor Ivanjica. His Serbian side sits back, soaks up pressure and comes at teams on the counter. But Herdman wants possession, he wants a varied attack, he wants forward progress.

But how did Cornelius, a striker phenom from Ajax, Ontario, become a centre back who’s making a name for himself in Eastern Europe?

At 15, he made the decision to make the move across the Atlantic. He first went to German side VfB Lubeck, then to VfR Neumunster. While he was with Neumunster, the team underwent an injury crisis. The team simply didn’t have enough defenders to play its next game. So, the coach asked Cornelius to make a temporary switch.

There was no going back.

But, why leave Canada so young?

“It was mainly my decision,” said Cornelius. “I told my parents that I wanted to play at the highest level possible. I wanted to get the chance to play in the Champions League. I wanted to test myself against the best players in the world. And, the decision was that the best way to achieve that was to get over to Europe as soon as possible.”

Older players helped him, he struggled with language at first. Now, he’s good enough that he can communicate on field, “left,” “right” “Man on!”

But, after some time in Germany, Cornelius is adjusting to life in Serbia. At first, it was difficult, as Cornelius didn’t speak the language. He said veteran players helped him feel welcome and get settled, and now he knows enough to bark out and understand field commands in Serbian. He can say “left!” “right!” and “man on!”

He won’t have to use his newly acquired Serbian language skills this weekend. Getting his first cap will probably be enough to trigger another excited phone call to his parents.