May 18, 2022
9 New Articles
Home Global Game CONCACAF They are who we (shoulda) thought they were: A draw in El Salvador a decent result for Canada 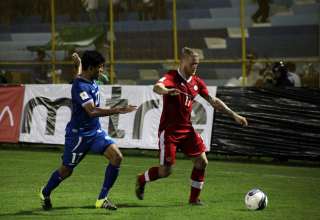 So, is the sky falling, or is it a dream start?

Judging by Twitter after Canada laboured to a 0-0 draw in El Salvador Tuesday, the jury is split. With the result, Canada now has four points after two games in CONCACAF’s Group A. The Canadians are in second place — three points up on El Salvador and four up on Honduras. Finish in the top two, and Canada is off to the Hex — and the dream to qualify for Russia 2018 is still very much alive.

The El Salvadoran side was, well, supposedly devastated by a dispute between its top players and the football federation. Neither side caved, so a new crew of recruits was brought in just in time for the opening Group A matches. But, make no mistake, it’s not like the players the federation brought in were rubes. We saw right-winger Dustin Corea shine as the best player on the pitch for the hour he was on; twice, he forced Canadian keeper Milan Borjan into very good, diving stops. Since signing with FC Edmonton in between the NASL spring and fall seasons, Corea has been a regular starter, a left-footed right winger who loves to shift inside and use his shot.

The El Salvadorans also left off Junior Burgos. That showed that this team does have some depth. Burgos isn’t the same guy you might remember playing for an instant at Toronto FC; he’s developed into one of the NASL’s best midfielders. If there were other players keeping him on the sidelines, it’s a sign that, yes, there is quality in that El Salvadoran side.

Yes, I’ve used a couple of NASL examples. It’s a good league, though. And it deserves some respect.

For the sky-is-falling crowd, do you remember where our program was back in 2012, how the Canadian team was picking ball after ball out of its own net in that 8-1 loss to Honduras? We’ve gone from that, to being ballsy about beating El Salvador in such short time? The El Salvadoran players deserve a little more respect than that. Going into Central America and getting any kind of result is difficult. A point is a decent return. Sure, we can beat our breasts about Cyle Larin hitting the bar and missing the net on another good chance — but four points after two games is a healthy return, even with two matches against Mexico looming.

Did we think El Salvador would roll over because it lost 3-0 to Mexico in the Azteca on Friday? Well, guess what — know who else could lose 3-0 to Mexico at the Azteca? Everyone else in CONCACAF. Even if the United States went down there and got beat by three goals, we might be surprised, but not shocked. It’s one of the hardest places in the world for a road team to get a result. It’s impossible to handicap any national team by how it performs in Mexico City — other than El Tri.

I get that many of you are scared that by “only” getting a draw in El Salvador, Canada will need to get a result in Honduras later in the round. That’s because we’ve already assumed that Canada will lose both home and away to Mexico and that El Salvador will lose home and away to Honduras; results which would put the Hondurans on six points after everyone in the group has played four games.

So, tell me, what did you see in Honduras’s and El Salvador’s games on Friday and Tuesday that would make you think Honduras is in any way a clear favourite when the two sides play each other? From what I saw in BC Place Friday, and on the beIN Sports feed Tuesday, El Salvador is a quicker team, holds the ball better, and is a bit tougher in the tackle, too. If anything, El Salvador looks the team more likely to take the lion’s share of the points when it faces Honduras twice. And, if that’s the case, then Canada will simply need to handle the business against El Salvador — in Canada — as the group stage winds down.

It’s like we haven’t learned anything from the drama we’ve watched unfold over the last few months. We have seen the likes of Netherlands, Serbia and Greece crash out of Euro 2016 qualifying. Meanwhile, the likes of Northern Ireland, Wales, Iceland and Hungary (although this is a Canadian soccer site, you had to know I was gonna sneak that Hungary mention in somewhere) are going to be playing meaningful games next summer.

The takeaway: Never take a result for granted. And, honestly, it’s bizarre to see just how many long-time Canadian soccer supporters all of a sudden felt like we could kick around a Central American opponent on a terrible Central American pitch.