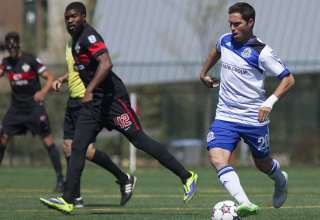 FC Edmonton and midfielder Chad Burt have mutually agreed to part ways, so that the player can return home to Florida to tend to personal issues.

The Eddies announced the roster move Tuesday, three days before the players reconvene in Edmonton for their pre-NASL-fall-season training camp.

“The team has the best group of guys I’ve been around, talent-wise and on and off the field,” Burt said through a release issued by the Eddies. “I have nothing but good things to say about the guys and the team. It was a mutual thing between the Club and myself, there’s no bad blood or anything like that, they were happy to grant my wish. The organization is top-notch, the way you are treated there as a professional is a better than a lot of other places that I have been. I would like to thank the fans for all the support and I want to wish the best to the team, the staff and everybody in the organization.”

Burt played in nine games this season, including the Amway Canadian Championship.

“I would like to thank Chad for his time at the club, he is a terrific professional,” FC Edmonton head coach Colin Miller said in the same release. “It was definitely a mutual decision, he had family concerns back in Tampa. When he approached me I had no hesitation, I approached Tom Fath about the situation and we all agreed it was best for Chad to head home. We wish him the very best of luck in his future.”

Over the weekend, Miller said he was looking at bringing in three new players; two of them would likely join the team in training camp, a third is expected to play for his country at the Gold Cup.

Of course, with the Gold Cup hint, we’ve got to speculate — here’s a list of the unattached players currently on the provisional 35-man rosters of the teams involved (at least, according to CONCACAF):