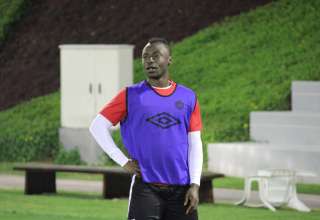 “He’s got a chance to be a key guy in the CPL,” Paulus said. “He’s the sort of player everyone else will be worrying about.”

But, just because REB is going to be an FCE player on Saturday, and has already been training with the club, it does not guarantee he’ll be an Eddie when the CanPL season kicks off in April.

“He’s also got options overseas,” said Paulus. “Obviously, he’s going to do what’s best for him.”

FCE visits Cavalry FC on Saturday, and the two will play at Edmonton’s Clarke Stadium on Oct. 20. These games, at least from Edmonton’s side, feature Academy products, trialists and pros who could legitimately be part of the roster in April. This weekend’s game is so vital, in fact, that Paulus skipped the CanPL’s Montreal combine to prepare. FCE did not send any staff to Montreal.

Other names that jump out: Both keepers: Dylon Powley, the former MacEwan University standout who had been playing in Sweden; and Will Sykes, the Edmontonian who had played for Lincoln Red Imps in Gibraltar. Paulus said each will get a game in the Al Classico series.

Paulus said that keeper Connor James, currently with the University of Alberta, is also in the mix, but the coach does not want to call him in at this point and disturb the keeper’s collegiate schedule. So, Powley and Sykes will be in the spotlight.

“I’ll be looking at how they make decisions on crosses, because I like to force teams outside, and how they play with their feet. We’ll be announcing a goalkeeper coach soon, and I know any keeper who will be with us will only get better.”

Three defenders will come from the PLSQ — Andre Bona, Kevin Bandundi and Patrick Nsamzimfura  — and another, Marcus Lees, comes from Sigma FC in League1 Ontario; so it’s clear Paulus hasn’t been ignoring the Eastern part of the country. Paulus is getting videos in the “tens and twenties” every day, and the PLSQ players stuck out, so they’ll get a look; they began training with FCE earlier in the week.

And, Amer Halilic, who was in the FC Edmonton Academy but moved to Germany in 2016, is back in the Alberta capital. Like REB, Paulus thinks Halilic could be a difference-maker in CanPL.

“He’s a big, strong kid, and since he came back from Europe, he reads the game a lot better,” said Paulus, who added that Halilic is good with both feet.

As mentioned up above, FCE didn’t send a representative to the CanPL’s open trials in Montreal. But Paulus said he was “pleasantly surprised” by the level of play in Halifax, and that a couple of players stood out.

But he tempered that by stating that what the coaches were seeing was a group of players, all from the same region, playing against each other. So, it’s hard to judge how well the Halifax crew really did until the coaches see the trialists from other parts of the country. When the coaches see trialists in Quebec and Ontario and in the West, then they’ll have somewhat of a better idea of how the Atlantic Canadian players stacked up.