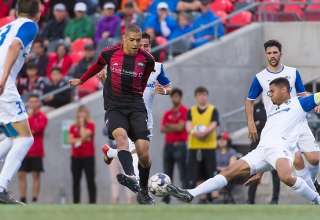 When it comes to the scoreline, the second leg of the Canadian Championship qualifying round went as expected. Already leading 1-0 after the first leg in Quebec, the USL’s Ottawa Fury took the home leg, 1-0 over AS Blainville.

Carl Haworth scored early in the first half — and, while the visitors were game, in truth they did little to trouble Fury keeper Maxime Crepeau.

Unfortunately, there is a major talking point coming out of the game, and it doesn’t have to do with the final score. It’s the state of left winger/fullback Maxim Tissot’s health. Tissot, the former Montreal Impact player who won an NASL title with the San Francisco Deltas in 2017, had been limited to just 48 minutes of USL action this year as he recovers from a knee injury.

He came on as a sub in Wednesday’s game, and, just minutes after joining the fray, he went on a run down the left wing. Without contact, at the touch line, he crumpled to the turf clutching his left knee. He was down for several minutes before stubbornly attempting to give it a go. His efforts only lasted a couple of minutes before he fell to the turf again, without contact. And, on the second occasion, he was taken off the field on a stretcher.

After the game, Fury coach Nikola Popovic said it would take at least a few hours to judge the severity of the injury. While it didn’t look good, there’s no point in trying to play doctor or speculate what kind of injury Tissot suffered. We get that a lot in sports “journalism,” people playing doctor by watching replays on TV and thinking they know exactly what is wrong. (Mo Salah in the Champions League final, anyone?) There is no point in further dragging our profession into the muck by trying to diagnose Tissot from afar. He clutched his knee, he was taken off on a stretcher. That’s all we can say for sure.

The tie, though, was for all intents and purposes done and dusted when Haworth scored to give the Fury a two-goal lead on aggregate. Adonijah Reid, the USL player of the week who bagged a hat trick on the weekend, started the play with a good dash up the left side. He squared the ball to Tony Taylor, who scored the Fury’s goal in the first leg. But Taylor was tackled in the box as he prepped to shoot. But the ball found its way to a wide-open Haworth, who smashed it in. It was proof that by spacing men in the box, well, good things happen.

Haworth celebrated by making like he was drying his eyes with the corner flag. Not bad when it comes to style points.

Taylor had a good chance to make it 2-0 in the second half. He was sprung thanks to a good through ball from Reid. But Blainville keeper Erwann Ofouya stretched to make a good save.

The Fury moves on to face defending champion Toronto FC in the semifinals.