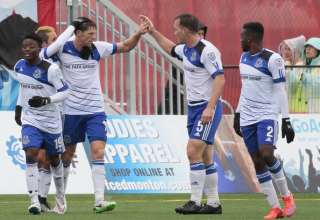 Back when my cranky ankles could still withstand 90 minutes of outdoor or 50 minutes of indoor, I played for an Edmonton men’s team called AC Misfits.

We had a guy named Hans who played for us, and he had the most powerful shot in our league. I mean, it was ridiculous. He once broke a keeper’s hand in practice. And, as his legend through the lower divisions of Edmonton’s men soccer spread, we found that, more and more, once he struck the free kick, guys in the defensive walls were falling over themselves to get out of the way. Hey, we all understood; these guys didn’t want to get badly hurt – they had to go to work in the morning. So we saw jumps, flamingoes, dives — all sorts of ways to avoid the ball.

On Sunday, both FC Edmonton coach Colin Miller and Minnesota United boss Manny Lagos will rue how the players in their teams’ respective walls got out of the way when free kicks were hammered in their direction.

Each team’s marker in the 1-1 draw was a free-kick goal that could have been prevented had the defensive walls kept their shapes.

In the 10th minute, the visitors took the lead on a wet, cold and generally miserable afternoon in Edmonton. Kalif Alhassan’s free kick, to be honest, wasn’t well struck; it was target right for the heart of the Eddies’ wall. But a hole appeared in the wall where defenders Allan Zebie and Mallan Roberts had stood; and the ball hooked into the corner of the goal. Keeper Matt VanOekel had no chance to stop it.

Then, after playing a man down for 65 minutes and injury time, the Eddies got the equalizer at the death. Daryl Fordyce struck a low, powerful shot that Loons’ keeper Sammy N’Djock couldn’t keep out. But Loons’ supporters will lament how the players in the wall jumped as a unit and allowed the ball to go under them.

Had Fordyce not scored on the last-gasp free kick, the spotlight would have been on referse Yusri Rudolf. Not for his decision to send off Eddie Michael Nonni in the 24th minute; but for deciding late in the game to not play advantage — and spoiling a golden Eddies’ scoring opportunity. A couple of minutes before the equalizing goal, sub Frank Jonke was fouled by Minnesota defender Thiago Calvano. As Jonke went down, the ball was played to Fordyce, who was in alone on N’Djock. But Rudolf made a major error; he didn’t play the advantage even though the Eddies never lost possession of the ball and Fordyce was in the clear.

Fordyce’s ensuing free kick was saved, but he got another chance on another could call just outside the box— and he scored with the low shot.

And, the Eddies had plenty of opportunities to say “die.” The team was without five regulars; wingers Lance Laing and Sainey Nyassi were each on national-team duty. Midfielders Thiago de Freitas and Ritchie Jones were out with injury. Defender Kareem Moses was also hurt.

The weather was also, well, awful. Environment Canada had it between 6 and 7 C through the game, but 30 km/h winds and driving rain made it feel more miserable than if it had snowed.

Then, after giving up the goal, the Eddies went down a man. Michael Nonni, inserted into Nyassi’s right-wing slot, got his second yellow in the 24th minute. To be fair, he could have little to complain about on either card he received. But the fateful one came after he lost the ball to Minnesota’s Greg Jordan. Nonni lunged in and got Jordan late.

But Minnesota, despite having the advantage for most of the game, couldn’t find the killer second goal. And a lot of the credit has to go to ex-Loon Matt VanOekel, who made a couple of splendid saves to keep the visitors close. He made a diving stop on Alhassan; and he also made a great reflex stop on a headed point-blank-range attempt from Christian Ramirez.

Those saves set the stage for a crazy finish — one that left Lagos dumbfounded.

“I’m speechless,” said the Minnesota coach. “We didn’t manage the end of the game well.”