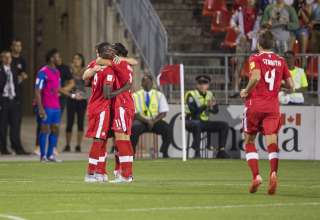 Dwayne De Rosario is Canada’s all time leading scorer. He scored 22 times in 81 appearances for the senior national side. That works out to 0.27 goals per appearance.

With his brace on Friday night against Belize, Tosaint Ricketts now has 12 goal in 43 appearances for Canada. That puts him at 0.28 goals per appearance, slightly better than De Ro’s standard. But, more interestingly, Ricketts has seven career goals in World Cup qualifiers; De Rosario had nine in his career.

Thanks to the two Ricketts’ goals and an injury-time back-breaker from Atiba Hutchinson, Canada came out of the first leg of its CONCACAF third-round World Cup qualifier with a 3-0 win over Belize.

With the visitors parking the bus for 90 minutes at Toronto’s BMO Field, simply trying to survive the first leg, Canada could attack for 90 minutes. Surely, 3-0 will be a disappointment to some of you out there deluded enough to believe that our national team could lay an eight- or nine-goal whupping on anybody.

While Belize offered nothing going forward — heck, Canadian keeper Kenny Stamatopoulos could have spent the game upstairs in the broadcast booth with Gavin Day and Terry Dunfield — the Canadians struggled to find a flow. There were occasions where Cyle Larin’s first touches went awry. Twice, Issey Nakajima-Farran ended up inadvertently blocking shots launched by his teammates. Shots were slammed wide and skied over the bar.

Both of Ricketts’ goals had scrappy feels to them; but that’s what you have to do when the opposition puts 10 men behind the ball. We’ve all seen teams try to pass the ball in the net when the opposition is falling back — and fail to score. To beat the park-the-bus, you have to win balls in close quarters, follow the bouncing ball in the penalty area, and just stick with it.

And, the stay-compact-and-defend-deep looks to be more and more common in its use. We have seen it all over the European pro game, and in World Cup qualifiers around the world. It’s become the formation of choice in the English Premier League this year. And, it really feels like the soccer world is entering an era of ultra-defensive soccer strategy (thanks, 4-2-3-1!), so more and more, coaches have to be able to teach players to shoot and follow rebounds. Pretty goals will still be scored, but ugly goals will win games and trophies.

Ricketts’ first goal game after a point-blank header from Larin somehow didn’t go into the net. The next touch came off Belize keeper Woodrow West, but he couldn’t control it. Defender Trevor Lennen had a chance to clear it off the line, but waited for the ball to settle after it took an awkward bounce. Ricketts dashed in and poked it across the line. The keeper and possible even Lennen also got touches, but the goal was credited to the Canadian forward.

On his second goal, Ricketts cashed in on a second chance, after Nakajima-Farran had got in the way of a Larin volley. The ball was cycled back out, pushed back into the penalty area, and Ricketts finished from in close.

Ricketts is a great reflection of the national team; he’s the subject of lots of criticism, and when he does do good things on the pitch, it tends to get ignored. But, if he can find the net twice in the second leg in Belmopan — and remember, Belize can’t afford to sit back — he’ll have just as many WCQ goals in his career as DeRo has.

The one real negative from Friday was that Julian de Guzman had to leave after 14 minutes. He’d missed the last couple of weeks for the Ottawa Fury because of injury, and it was clearly a gamble to have him on the team. He pulled up in minute 13 and wasn’t able to continue, and that’s got to be a worry for his NASL side.