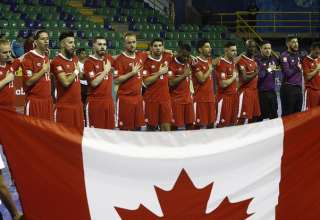 But, Tuesday’s must-win-or-draw game against Cuba in the CONCACAF Futsal Championship gave us a few minutes of outstanding drama.

With just a little more than six minutes left to play, Canada was down 5-1 to the Cubans. To qualify for the Futsal World Cup for the first time since 1989, Canada needed a draw or a win. It was surely a bridge too far.

And, after going up 5-1 a few minutes earlier, the Cubans celebrated mightily on the court, in front of the Canadians.

In the 34th minute, Freddy Moojen scored twice. Then Vahid Assadpour scored in the 36th to make it 5-4. With goalkeeper Joshua Lemos added to the fray as a fifth attacker, all of the momentum looked to be going Canada’s way. It felt like one of those great sport dramas that are the stuff of Scott Young books and Canadian Tire commercials; cocky opposition celebrates a sure win in front of your bench before the final whistle — so you get off the deck and come back.

But, Cuba scored two late goals with Canada pressing, including one from keeper Breniht Suarez, to finish up with a 7-4 win.

Of course, it wouldn’t have been a CONCACAF match without some part of a commentator’s work becoming part of the lexicon of the Canadian-soccer-geek Twitterverse. We’ve had Mad Bull and Maestro from a World Cup qualifier in Belize; now we had a commentator claim that a ball sent out of play “nearly hit the mango lady.”

Now, I’m not entirely sure if there was a mango hawker in the Costa Rican arena, or if it was a spectator eating mangoes, or maybe just someone in a nice, tropical, mango-coloured shirt. But, as the #mangolady hashtags piled up amongst the Canadian soccer followers who always gather on Twitter to comment on the streams, we saw a fall and rise and fall again of a Canadian futsal team that became folk heroes over the last week. Hopefully, the fact that Canada got oh so close to a World Cup will spur more people — especially those outside of the established leagues in Ontario and Quebec — to play the game. If there is a legacy that this team can have, it’s that in years to come, Canadian futsal coaches will have a wider talent pool from which to choose players.