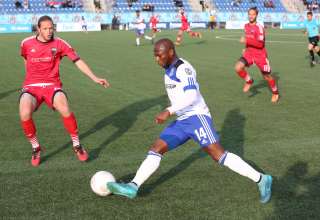 In a two-legged series, we so often see the team that’s on the road for the first game play cautiously. Bu that’s not how coach Paul Dalglish set up the Ottawa Fury.

And, as a reward, the Fury will be at home for next week’s second leg in what should be nothing more than a victory lap. A 3-0 win was a just result for a Fury team that took the first leg of the Amway Canadian Championship preliminary round to FC Edmonton.

Three road goals, while giving up none. That’s a fine haul for a Fury team that’s been knocked out of this competition by the Eddies in each of the previous two campaigns.

Timbo, Carl Haworth and Idan Vered scored for the Fury against an FC Edmonton team that was punished for critical errors made throughout the game.

Fury coach Paul Dalglish said “I don’t believe in defensive football.” Tonight’s win was a reflection of that.

“Successful people don’t wait for things to happen to them,” he said.

At halftime, with FC Edmonton trailing 1-0, coach Colin Miller was so angry about his team’s performance, he said that “we’ll end up being relegated, and there is no relegation.”

The Fury pressed high right from the start, pressing Edmonton’s defenders into a series of turnovers and fouls. In the 13th minute, the Fury’s bravery was rewarded; a free kick from James Bailey was nodded into the goal by Timbo. It was a fantastic header; Timbo’s run was actually taking himself away from the Eddies’ goal, but we was able to twist his neck, Sandor Kocsis style, and get enough power on the ball to get it inside the far post.

The Eddies did create one great scoring chance late in the half; but Ottawa keeper Marcel DeBellis pawed away a looping header from teenager Shamit Shome.

Any chance of an Eddies second-half rally was decimated by a comedy of errors that led to Haworth’s goal. Centre back Albert Watson left a back pass to VanOekel a little bit short. But, then VanOekel tried to play the ball back up the middle, where it was pounced on by Ottawa Lance Rozeboom. He didn’t spurn the gift, he shifted the ball to Haworth, who had time to size up the open goal before rolling it in.

Haworth said the chance wasn’t as easy as it looked; that sometimes it’s harder to have almost too much time.

“But when the defender (Watson) slid I put it under him and through his legs.”

“It tears the heart out of your team,” Miller said of the goal. “You wouldn’t expect that at the U-6 or U-7 level.”

The night got worse for the Eddies when Watson collided with Ottawa’s Mozzi Gyorio when a 50-50 ball bounced awkwardly on the turf between them. Watson, despite blood coming out of his eye, tried to continue. But he finally took a knee after trying to play for a few minutes — and was subbed out before the final whistle.

Like Watson, the Eddies were left beaten and bruised. And, for a team that had earned seven of a possible nine points in their previous three NASL matches, the Cup was a reminder that you’re only as good as your last game.