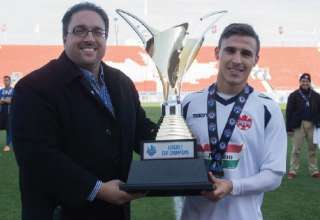 Dino Rossi had a vision; to create a sustainable developmental league for up-and-coming talent; after shaking off the naysayers, the new Ontario league has become one of the most remarkable achievements in Canadian soccer…

It was a cold night in Vaughan, Ontario, just north of Toronto. The battered turf at the Ontario Soccer Centre’s main field had seen better days, and only a small crowd had shown up to watch the occasion. However, what was happening was significant. Ontario’s third division of professional soccer was born.

It would take 13 minutes for Toronto FC Academy midfielder Dylan Sacramento to score on the Vaughan Azzurri that night. It was the first goal in the history of League1Ontario, the brainchild of Canadian-soccer-activist-turned-insider Dino Rossi.

TFCA would eventually go on to win the league’s first championship, with Vaughan eventually wining the first League1 Cup.

Those triumphs were still months away on that first night, but the most important victory was already on the books. The simple act of kicking the league off was something that few thought was possible. It might have been impossible, if not for the drive of Rossi, a man used to fighting against conventional wisdom.

Launching League1 was the culmination of nearly seven years of work for Rossi, who had long championed the need for local clubs in Canada to take the lead in developing players. To him, club soccer in this country was too often about pushing registration numbers higher, with little regard to programming. Canadians weren’t producing players, but it sure could run U-10 house leagues.

It was a problem understood by many, but that few were willing to tackle. Not Rossi. He first burst onto the forefront as the organizer of a protest against the leadership at the Canadian Soccer Association, which took place at a 2007 Canadian men’s national team friendly at BMO Field. That “Sack the CSA” movement, named after the black t-shirts bearing that simple message that protesters wore, drew national and international attention.

That night, an orange pylon sat on top of an old, red semi-compact car that was parked about 100 yards from BMO Field. There, Rossi stood handing out t-shirts to groups of fans who would often share their frustrations about the state of the game in Canada. For years, many would tell him that they felt that no one else understood their frustrations. Now, they knew differently. That night was what first brought together many of the people who would eventually lead the fight for governance reform at the CSA.

And, for Rossi, there would be no turning back. It was the start of his direct involvement in the game. He would eventually start his own club, Milltown FC, which played a season in the Canadian Soccer League. When match-fixing allegations started to bring that league down — the CSA removed the CSL’s sanction early in 2014, long after Milltown had left — Rossi knew that a fresh start was needed for Canadian soccer at that level of play. It was around then that League1 Ontario was first conceptualized. League1 Ontario is designed to fill the semi-professional part of the development pathway. In the past, when a player reached the end of his youth play, there were only a couple options for all but a few players.

Those academically inclined could play a few years in the NCAA, CIS or CCAA, but there weren’t any options for those players who weren’t able to get into a post-secondary school. If a player was not on the national-team track by a young age, he was never going to be.

The CSA identified this shortcoming in its five-year Strategic Plan, released in 2013. Rossi, with the cooperation of the Ontario Soccer Association, got down to work. It took more than a year of intense preparation – Rossi jokes that a his kids ask him if he’s “going to soccer” every time he stands up from the couch but, by the time Sacramento scored there were 10 teams, all promising to maintain professional standards, signed up and ready to go.

At the launch, Rossi was full of hope.

“This league is designed to bridge a gap in Ontario’s talented player pathway on the men’s side,” Rossi said at the time. “To this point, we have not been able to adequately address the needs of our top players once they have exhausted their opportunities at the highest levels of youth soccer. League1 will go a long way to correcting this issue.”

“We were excited by what talent we’d find,” he said following the final game of the season. “But, we were surprised by just how much quality there was. There was some real talent in the league.”

Indeed, there was. More than 80 players who played a game in League1 this year played for a post-secondary school in 2014. That list included eight members of the CIS champions, York University, and two members of the CCAA champions, Oakville’s Sheridan College.

Impressively it also included the consensus No 1 pick in the 2015 MLS SuperDraft, and senior Canadian international, Cyle Larin.

Larin, who played for his long-time club Sigma Academy, said that League1 was the perfect way to prepare for his draft year in the NCAA.

“It [was] great to have,” he said. “Sigma has helped make me the player I am and I’m always proud to represent them. League1 is a good, challenging league. I wish it had been there when I was younger. It would have [made me a better player].”

Toronto FC Academy head coach Michael Stefano had high praise for the league and its importance in the development of his team. Losers of only one game all year – the League1 Cup semifinal – TFCA was the darling of the first season.

“Our focus is always on doing what needs to be done to get these boys to the next level — to make them professionals,” Stefano said. “And our training and game play reflects that. We will never sacrifice the way we play for the sake of a win.

“But winning is important to the development too. People forget that sometimes. When players are this age [17-21] they need to demonstrate that the skills we’ve taught them can be used to win games. Having League1 there has been vital for us and for our goals at TFC.”

Stefano stressed that having a high-end league in which to play was key to keeping focus over a long year.

“The boys have really enjoyed having League1 there this year. It’s helped keep them hungry and focused on their training. It’s difficult to maintain that focus without having that weekly challenge there.”

Even with Toronto FC scheduled to launch a USL-Pro team next year, Stefano says that TFC will be part of League1. In fact, he sees a League1 and USL-Pro combination as an ideal pathway for a player to eventually find his way to the MLS team.

“It’s going to be a great opportunity for our younger guys to step into the leadership roles that the older guys that graduate to USLPro leave behind,” Stefano said.

It’s precisely that type of pyramid that Rossi envisioned when he launched League1 — the natural progression that exists in most other countries in the world that was lacking here. Rossi said he’s happy to see that coming together.

Happy, not complacent. Rossi said that, after a short break, he will be back to the daily grind of making League1 better. See, the first year wasn’t perfect; only nine of the 10 teams finished the year. Internacional de Toronto had its sanctioning pulled midway through the year for failing to meet the league’s required standards. The OSA was also criticized in some circles for not having a women’s League1.

On the women’s side, Rossi recognizes the need and plans are already well underway to fill that gap. If enough teams meet the standard for 2015, then there will be a women’s side. That’s something Rossi would love to see.

“It’s a very important piece of our plans and our call for teams was well received. We are confident we’ll be ready to go for 2015.”

But, not before the standards are in place. That’s the one area League1 refuses to bend on; for too long in Canada we’ve done things in half-measures in this sport.

League1 hopes to change that.

It also hopes its model spreads. So far, only two of the 10 provinces have set upleagues at League1’s level, with Quebec’s PLSQ the other. During a year-end cup competition between the two leagues the talk was on how to spread the model. There were whispers that representatives from British Columbia were already looking to replicate what Ontario has done.

“Too often in Canadian soccer we talk about what we can’t do,” Rossi said. “Maybe I’m crazy — my family might agree — but all I see is potential.”

Rossi dreams big. He says that his long-term vision includes the possibility of a League2 with promotion and relegation.

“We’re a long way off yet,” he cautions, “but that’s my vision. It would give smaller areas a chance to organically grow at a level that suits them.”

One area that the league has been questioned on is its focus on the Greater Toronto Area —seven of the nine teams are in the GTA. Rossi says that’s not something he or the OSA has much control over.

League1 is open to anyone that wants to join, so long as the club meets the league standards.

“Not every area is at the same place when it comes to elite senior play,” he said.

Rossi suggested that there are a couple areas of the province that are ripe for teams. Specifically he’s hopeful that the Capital Region and Niagara/Hamilton will be represented soon.

“I think when you see the first group of kids graduate out of the Ontario Premier Development League in four years you’ll see an increased demand for elite senior options and League1 could have a role to play in filling that demand.”

The OPDL was launched this year and strives to impose a standards based curriculum on youth clubs.

He may not be handing out t-shirts by his car anymore, but Rossi continues to challenge the old guard in the sport to be better. It seems that the insider still has a little activist in him.

“I like to think I’m still an activist,” he said. “I’m just trying to openly challenge the status quo from the inside.”