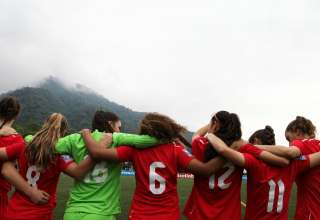 Canada booked its spot in next year’s U-20 Women’s World Cup, but the team sure didn’t make things easy on itself.

Canada was perfect in the penalty shootout, triumphing 5-4 over Mexico in the semifinal’s of the CONCACAF Women’s U-20 Championship. As a semifinal winner, Canada booked its place in Papua New Guinea. Playing in the final is gravy.

But the teams went scoreless through 90-plus minutes of regulation soccer and 30 minutes of extra time. And, though the teams visibly tired near the end, Canada showed its backbone in the shootout. Victoria Pickett finished Canada’s five-for-five effort from the spot; even though Mexican keeper Emily Alvarado guessed correctly, Pickett’s shot was well-placed, low into the corner.

Penalties — especially in a game that has so much riding on it — are a test of mental toughness as much as they are of skill. So kudos to the Canadians for getting through it.

But, truthfully, it didn’t have to go that far. In the second half, Canadian striker Taylor Pryce twice found herself alone one-on-one with Alvarado. On the first try, the keeper made the save. On the second break, which came right before the end of regulation, Pryce rolled her attempt wide of goal.