August 08, 2022
9 New Articles
Home Women's Soccer Olympics “The Call” will be added to the lore of Canada-U.S. matches 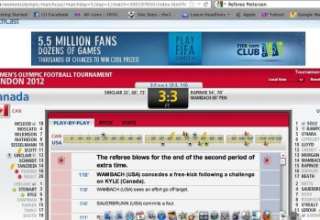 FIFA's Matchtracker after the end of 120 minutes. Even FIFA didn't want to change the scoreline!

It will be discussed for years to come. For followers of the Canadian national women’s team, it will be simply be known as The Call. Maybe some profanities will be added.

Canadian fans won’t reflect on Alex Morgan, rising over Canadian sub Chelsea Stewart and delivering the winning header in the 123rd minute of play, giving the Americans a 4-3 win in the Olympics semifinal at Old Trafford. The most epic match any Canadian national side has ever played will be defined not by the American winning goal, but the controversial decision by Norwegian referee Christina Pedersen to penalize keeper Erin McLeod for holding the ball too long.

With Canada up 3-2, on the strength of a heroic hat-trick effort from Christine Sinclair, Norwegian referee Pedersen called McLeod for time wasting in the area — for holding on to the ball too long. Sure, it’s a letter-of-the-law call, but, if Pedersen made that call, she needed to apply that rule equally on the other side of the pitch. And, in a game of this magnitude, it came across as a chance for a referee to pick one ticky-tack offence out of the crowd and apply her brand of justice just that one time.

On the ensuing free kick, Megan Rapinoe’s shot slammed into Diana Matheson, then caromed into the arms of Marie-Eve Nault — who was called up from the taxi squad to play for the first team because of the rash of injuries on the Canadian back line. Really, there was nothing Nault could have done to get out of the way of the shot. But the penalty was given, and Abby Wambach was automatic from the spot to send the game to extra time.

The penalty call? Fair enough. The indirect free kick that set it up? That one will be remembered for a long time. Canadians will feel they had enough to win the game 3-2 in regulation. Would the Americans have found a third goal had they not been handed the gift? Maybe. It was a fantastic match — and maybe another twist would have been added to the plot. But we will never know.

Canadian fans remember the 2007 Gold Cup, when the officials made a mistake on a late Atiba Hutchinson effort, calling back a goal for offside which would have sent the semifinal between Canada and the U.S. to extra time. So, for Canadian fans, this will feel like yet another case of the big soccer power getting the call over the underdog. But this one feels far, far worse. Had the third American equalizer come on a goal like the quality of Morgan’s winner, or Rapinoe’s lashing drive off the post that tied the game at 2-2, we could have lived with that. Fair play. Even Rapinoe’s second half goal that tied the game at 1-1, a corner kick that floated in because no Canadian player covered the near post —and then defender Lauren Sesselmann and McLeod proceeded to get in each other’s way as they tried to scramble back to the ball — was worthy enough.

Normally, my stomach turns at the “we lost, but we tried hard” journalism from high-school newspapers that returns when we get to the Olympics. But this was a stellar effort from the Canadian side. The players on John Herdman’s side don’t know what it’s like to beat the Americans, and Sinclair gave us a performance for the ages.

Sinclair has to be named Canada’s athlete of the year this December. That vote has got to be a shoo-in. Her first goal showed how level-headed she can be in the most stressful of circumstances. Nault played a smart ball to the top of the box to Melissa Tancredi, who turned and played a ball to Sinclair, who was in no man’s land between three U.S. defenders. Instead of blasting the ball, Sinclair made one deft touch to put her at a better angle towards goal, and then put Canada ahead.

And, like a true leader, she pulled Canada ahead two more times after the Americans equalized. A strong header off a Tancredi cross put Canada ahead 2-1, pulling up her teammates after their poor marking on a corner gifted Rapinoe a goal.

And then she rose again after Rapinoe had made it 2-2, smashing home a Sophie Schmidt corner to give Canada a 3-2 lead.

Had this been an epic duel between Sinclair and Rapinoe, the two best players from their respective teams on the day, the game would have been blessed. But Pedersen decided to intervene.

In this space, I usually defend refs. That’s because most of the calls they make are bang-bang; they don’t have replays and they don’t get second looks. They have to make split-second decisions. But this was a case where Pedersen had to look to make a call. This was a call she had time to think about. She decided that she was bigger than the players out there. And that’s a shame.

In 1972, the American basketball team famously refused to accept their silver medals after the Soviets were allowed to try a last-second in bounds play for a gold medal buzzer beater three times. While this wasn’t as grievous, you wouldn’t blame Canadian fans for secretly wishing our women’s team would beat France in the consolation game, then walk away when the bronze medals were being awarded.