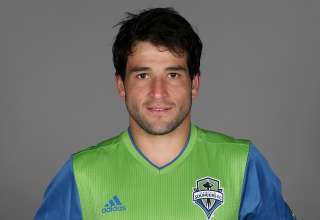 Nicolas Lodeiro was signed by the Seattle Sounders on July 27; at the time, his new team was eight points out of the playoffs.

Fast forward to December, and Lodeiro has led the Sounders to MLS Cup, where they’ll face Toronto FC at BMO Field. The Uruguayan midfielder has been Mr. Everything for the Sounders. He scored four times and set up eight more in 13 league games, as the Sounders made a frantic push for the playoffs under new coach Brian Schmetzer. Lodeiro then scored four times in five playoff games.

Stopping Lodeiro will be key for Toronto FC this Saturday.

TFC coach Greg Vanney said Lodeiro “can unlock the runs of other guys” and is “one of the best guys in the league at pulling strings and moving the game around.”

More from Vanney on TFC’s Public Enemy No. 1: “Nicolas is a very technical player. He doesn’t need a lot of space, and he’s very clever about how he moves about the field.”

Lodeiro and the Sounders may feel like a Cinderella story; but, really, it would be absolutely incorrect to call them that. Really, they are yet another example of the kind of team that usually wins MLS Cup. They have all the ingredients of teams that have won previous titles; they were highly rated in preseason, struggled to start the season, tinkered and tinkered, finally found a rhythm, then scrambled just to make the post-season and then stayed hot once the playoffs started. This has pretty well become the template on how to succeed in MLS.

“In some, small, odd way I think it helped us,” he said. “We were in a place where every game was a must-win game just to make the playoffs.”

The Sounders became comfortable with adversity. So, even though the Reds will be home, even though game-time temps should be slightly below the freezing mark, they need to beware of a squad that looks like 2016’s team of destiny. And they’ll need to slow down Nicolas Lodeiro.