May 21, 2022
9 New Articles
Home NASL & USL FC Edmonton FC Edmonton remains defiant: Owner remains confident that there will be an NASL in 2017 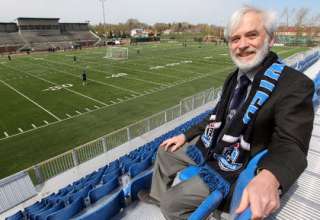 “I am still fully committed to playing in NASL,” Fath said Thursday.

“The plan going forward is that the league will be playing in 2017.”

This stance is consistent with the fact that the team’s players are making public appearances at the new team shop, that coach Colin Miller has been signed to a three-year extension, and that the team is looking to hire new staff members.

Fath wouldn’t comment any further on the topic, keeping to his policy of not speaking publicly about league business.

Meanwhile, reports indicate that all but four of the remaining NASL teams are nearing a deal with USL, which would see them jump leagues. New York Cosmos players and staff posted their fond farewells on Twitter after they were informed that they were now free agents.

Putting it bluntly; in the blogosphere and Twitterverse, the NASL’s demise isn’t being discussed — it’s being treated as an accepted fact. But, in Edmonton, far removed from the United States Soccer Federation/USL/NASL discussions, talk about these troubles has been limited to the Supporters’ Group and, well, this site. Mainstream media isn’t touching this story, yet.

After all, it’s hockey season — and Christmas is coming, which means any Oilers coverage in Edmonton will be augmented by stories about… the World Junior Hockey Championship.

Meanwhile,  USSF has delayed any decision about divisional statuses until next week. Going into this off-season, USL — which features a mix of independent clubs and teams affiliated with MLS clubs — was Division 3. NASL was Division 2. The Ottawa Fury will move from NASL to USL for the 2017 campaign — a move that was announced near the end of the 2016 NASL season, the same day that the Tampa Bay Rowdies announced that they would move to USL.

But, from the Canadian perspective, the divisional distinction is a superficial discussion. The Canadian Soccer Association’s stance is that these USSF distinctions really don’t matter in Canada, as all major professional clubs can compete for the Canadian Championship.