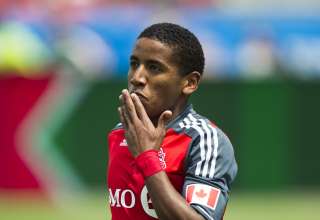 Joao Plata, that is.

Toronto FC confirmed today that Plata will not travel with his national team to New York City, where it faces Greece June 7. The rookie midfielder will instead be available for TFC coach Aron Winter to select for Saturday’s match against Sporting Kansas City, which has yet to play at home this season as it waits for its new stadium to be completed.

Plata was originally scheduled to be part of the Ecuador squad for both the June 1 and June 7 friendlies. Of course, the June 7 game may be off, as on Friday the Greek government decided to suspend the national football program and all league operations in an effort to spur on reform, and root out match-fixing and hooliganism. FIFA will no doubt be calling the Greeks on government interference with their football program any minute now.

Plata came on as an injury-time sub for Ecuador, just in time to be on the pitch for Tosaint Ricketts’ equalizer as Canada fought back for a 2-2 draw at BMO Field.

Rueda’s decision to only give Plata about a minute of playing time — and then send him back to Toronto FC earlier than planned — would indicate that the five-foot-two sparkplug didn’t make enough of an impression to get a national-team recall for this July’s Copa America in Argentina.