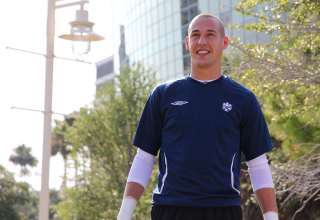 One day after playing the full match in a 2-2 draw with Ecuador, Canadian national team keeper Milan Borjan has found a new home.

Turkish side Sivasspor announced Thursday that it has Borjan committed to a four-year deal.

Sivasspor finished one spot ahead of the relegation zone in the 2010-11 season. The 57 goals allowed in a 34-match season was fourth-worst in the Turkish league, and second-worst among teams that survived the drop. So Borjan has a heavy task ahead of him.

Borjan had been playing FK Rad in the Serbian league. UPDATE: Rad has confirmed the move to Sivasspor is on, but that Borjan will sign the deal after the Gold Cup.

Sivasspor’s goalkeeping situation is a bit muddy, with Bosnian Sead Ramovic looking to be the top of a very confusing pecking order before the signing of Borjan. Also in the fold is keeper Korcan Celikay, on loan from Besiktas.