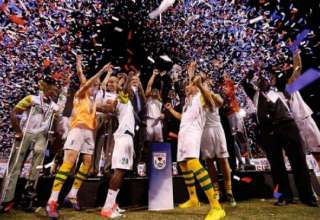 On a day when San Jose sniper Chris Wondolowski scored his 27th goal of the season, tying him with Roy Lassiter as having the best single scoring season in MLS history, his league was upstaged by what was going on in Division 2.

While MLS wrapped up its regular season, the Tampa Bay Rowdies and Minnesota Stars gave us an NASL championship that was far more enthralling than any MLS Cup in recent memory.

Actually, more entertaining than any World Cup final held over the last 30 years, too.

And it was a game that had plenty of interest for Canadian NASL fans: Former FC Edmonton striker Daniel Antoniuk scored the late second-half tap-in that allowed Tampa to tie the series with Minnesota 3-3 on aggregate. And, earlier in the match, Canadian defender Andres Arango headed a ball over to Keith Savage for the Rowdies’ second goal of the game.

On Saturday night, both Antoniuk and Arango had the chance to touch the Soccer Bowl.

The Stars, are expected to find out their fate weekend — as the Board of Governors meets to determine if a local buyer for the club is a reality, or if it will fund the team for another year, or fold it. And, the Stars arrived in Florida much like they did in 2011, when they faced Fort Lauderdale in the final. In both cases, after the first legs, the Stars held two-goal leads.

In 2011, Minnesota coach Manny Lagos had his team park the bus in the second leg in Fort Lauderdale, and the dull 0-0 draw gave the Stars the title.

This year, instead of a dull 0-0, we got fireworks. The Rowdies erased a 2-0 deficit with a 3-1 victory (road goals aren’t weighted in NASL as they are in Europe) and, despite being down a man through the entire two halves of extra time, Tampa Bay lasted until penalty kicks.

And then the Jeff Attinella show began, as the Rowdies keeper save three of five penalties to give his team a 3-2 triumph in spot kicks.

The Rowdies scored the first goal of the second leg in the 24th minute, as former Wimbledon, Newcastle and Wolves forward Carl Cort scored after scooping up a rebound off the initial attempt from Savage.

Tampa Bay went into halftime leading 1-0, knowing it needed another to bring the game level. Right after the second half kickoff, the Rowdies got that goal, as Arango set up Savage.

But, a minute after Tampa drew level in front of more than 6,200 home fans, the Stars got the aggregate lead back on a goal from Lucas Rodriguez.

That set up Antoniuk for the late dramatics, as he tied the game up in the 85th minute, tapping home a ball that teammate Mike Ambersley had chipped over Stars’ keeper Matt VanOekel.

The goals were surrounded by several good saves from both Attinella and VanOekel, as Tampa got what it wanted, which was a loose, offensive game with lots of gaps in the field. When you trail by two goals, you want an open game.

Tampa had one more obstacle to get past; the Rowdies played the extra time down a man after Shane Hill saw red for a late, hard tackle attempt on Minnesota’s Simone Bracalello.

But the Rowdies ended up doing in 2012 what the Strikers couldn’t do in 2011 — finding a way to break Minnesota’s magical postseason spell.