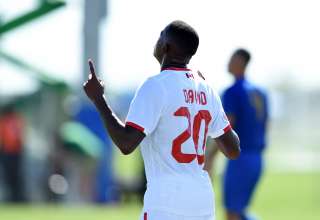 There are two weeks to go until Canada plays its first-ever Nations League home game. Dominica will provide the opposition in Toronto, and will be expected to be nothing more than cannon fodder,

So many exclamation points.

Yet, go to Ticketmaster’s website, search out the Oct. 16 match, click on the link for BMO Field’s seat map, and you find enough blue dots — which represent unsold seats — to make up an ocean. At this point, it looks like it would take a fantastic surge just to get the lower bowl half full.

“It’s up to us to take care of business on the field and do what they [fans] want,” Herdman said in a conference call Tuesday. He said it’s up to the players to create the energy and score goals.

“It’s Tuesday night, it’s going to be cold, and what we’re explaining to the fans is come on and let’s get out tonight, let’s make that little bit of an effort and turn your TV off, bring your son along and start this journey in earnest.”

There have been ticket specials for this game, as well. And, right now,  a seat in section 115 will set you back just $24, including fees. You can sit at midfield, just a few rows from the sidelines, for $55.50.

When it comes to the modern sports marketplace, these are not expensive tickets. And, if you go to StubHub, the resale ticket marketplace, you’ll find tickets in section 114 for less than $18 US each.

Despite fairly decent ticket prices and Canada’s most star-studded lineup in a generation, this game is falling flat when it comes to fan interest.

I’d argue that the format of Nations League qualifying, which sees the team at the top of the qualifying group win places into the “A” pool with the likes of Mexico and the United States, is a deeply flawed system. Basically, the top teams will all finish 4-0-0, so it comes down to goal difference. So, Canada needs to bludgeon its opponents, then bludgeon them so more. Canada set a record for goals in its first Nations League qualifier, in Florida against the US Virgin Islands.

But, blowouts, while they can be fun, don’t make for compelling viewing. And, even with the home team on the winning end, it’s hard to get people to spend money on a game where they know the outcome going in.

Yet, deep down, I know this fans-won’t-pay-for-blowouts argument is flimsy. Because that would assume that most fans are educated enough about the Nations League to make that kind of judgment. Truth is, outside of the hardest of the hardcore, sports fans in this country have no clue what the Nations League is or why it matters. There really is no understanding of why being at the top of the table is so important. Heck, most don’t even know there even is a table.

I mean, credit to CONCACAF, it has created a new tournament, a new vision for the region, and has basically kept it a secret from the mainstream.

And, the hard sell can be tough for Canada, as it’s not like you can bring Davies in from Vancouver or a guy from Europe to do a  bunch of talk radio in Toronto. Herdman is the tool Canada does have — and he needs to be used. The game, face it, needs to be pushed.

It’s great for Canada that Herdman has put together the best team this country has seen since, well, I was young and thin. But it won’t be a great look if this new, maybe golden generation, makes its home bow in front of a lot of empty seats.