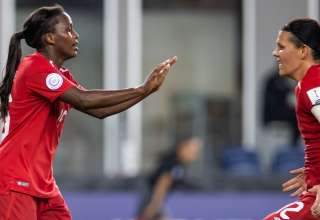 OK, there’s a sports adage that I’ve heard over and over that tells us “don’t criticize the wins.”

So, after Nichelle Prince’s brace gave Canada a 2-0 win over Jamaica in their group-stage opener at the CONCACAF Women’s Championship, all is sweetness and light. Right? Right? A Friday night match in a Texas USL stadium in front of, well, hundreds didn’t provide a lot of fireworks, but three points is three points, uh huh?

Oh, who am I kidding? A win is nice, sure, but Canada didn’t hit its highest gears at any time in the match. And, as CONCACAF begins its Championship-which-also-serve-as-World-Cup-qualifiers, it was a worrying game, considering that Costa Rica put eight by Cuba in the group’s other match.

Prince’s first goal was an absolute gift, as well. The first half-marker was presented to her on a platter. She was standing in the Jamaican penalty area, in the right place at the right time, as the ball was presented to her by a yellow-jerseyed defender. The initial sequence came from a Canadian corner, and Jamaica had two chances to clear the ball — fairly simple opportunities to clean things up, actually — and, instead, went short and up the middle each time.

Her second goal was a pretty one, as she dashed on to a wonderful through ball by Adriana Leon and slotted a low shot past Jamaican keeper Sydney Schneider.

But, outside of that, Canada did little to impress, unlike the marker Costa Rica threw down earlier on Friday in Edinburg, Tex.

Throughout the first half, Canadian fullbacks Ashley Lawrence and Allysha Chapman were able to get down the wings, but the Jamaicans crowded the middle of the area, daring the women in red to make inch-perfect crosses or win second balls. Canada didn’t do either. And, when the chances came, the shots were wayward. We’re still waiting for the Christine Sinclair’s moon-shot free kick attempt from the first half to return to Earth.

Sinclair missed on some good chances. In the second half, after Lawrence had the keeper beat, she managed to have her shot blocked away by the Jamaican defence. Leon missed from in close.

And, when the score was only 1-0, Canada caught a break. On the counter, Jamaican striker Khadija Shaw found herself in a one-on-one battle with Canadian centre back Kadeisha Buchanan. The two came together at the top of the Canadian penalty area, and Shaw, the smaller of the pair, went down. Referee Francia Gonzalez Martinez waved away the penalty appeals, though it was pretty clear Buchanan took out Shaw’s leg and didn’t get any of the ball. At that point, it could have been, should have been 1-1, but Canada got let off the hook.

But, that, really, was the theme for this whole game. Canada had outscored Jamaica 40-1 in five previous matches in this tournament’s history. And while those were different players from different eras, it is indicative of the gulf between the two programs.

Canada, though, wasn’t impressive. But, we’ll all forget this stutter if Canada recovers to play at a higher standard the next time out. Teams have to pace themselves, right? Because that might offer an explanation for a game as flat as this one was.