July 07, 2022
9 New Articles
Home MLS Toronto FC Super Frei: The man of the hour has an air of great power 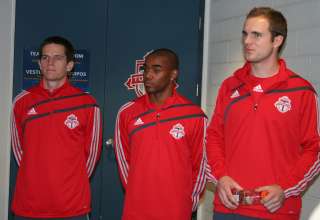 Well, in this case, you can use the Klingon proverb, “revenge is a dish that is best served cold,” and it’s totally apropos.

Stefan Frei, drafted by Toronto FC in 2009, may have dreamed back then about winning an MLS Cup at BMO Field. He probably didn’t imagine at the time that he’d do it as a member of the Seattle Sounders.

Seattle won the title in penalties, 5-4, after Toronto FC and Seattle played to more than 120 minutes of scoreless soccer, Saturday. From the outset, it looked as if Seattle’s strategy was to get the game to kicks; striker Jordan Morris was a lonely figure as the lone striker.

And, in regulation and extra time, TFC keeper Clint Irwin didn’t face a single shot on goal. Through the game, you had to wonder how the guy could manage to keep warm in -10C temperatures at BMO Field.

But while Irwin had little to do, Frei was regularly asked to preserve his team’s push for penalties. He made seven saves to Irwin’s none. And none was bigger than his extra-time robbery on a header from Jozy Altidore. It looked as if Altidore’s looping header was headed for the top corner of the Seattle goal;  but, leaping, and holding himself in the air as if in slow motion, Frei was able to reach behind his body and claw the ball back.

“It was a hell of a save,” said Altidore.  “At the end of the day, you must pull off something special.”

Frei also made a brave play late in the second half, challenging Altidore for a ball that it looked like the TFC striker was simply going to nod home. But Frei read the play quickly, got his fists to the ball just before Altidore’s head got there, and got crunched by the Reds’ striker for his trouble.

After suffering through a couple of injury-plagued seasons, Frei was traded to the Sounders in 2013.

“I’m focused on my situation now, I’m in Seattle and this final could have happened anywhere,” Frei said after the match. “We had a chance to make history and this is what you live for.”

Frei also had some luck on his side; just before he made the leaping extra-time save on Altidore, he watched a shot from Canadian striker Tosaint Ricketts screw just wide of the post. Ricketts, the TFC super-sub, had a wonderful chance to win the game for the Reds from the top of the box, but, well, it can be a game of inches.

After five rounds of penalties ended at 4-4, Reds fullback Justin Morrow struck the bar with his attempt, and Seattle’s Roman Torres — who was fantastic for 120 minutes, repelling attack after attack — finished his chance to give the visitors the Cup.

For the soccer historian, this MLS Cup might have felt a bit like the 2005 FA Cup final between Manchester United and Arsenal. Manchester United dominated the game, and should have won it in the 90 minutes of regular time. The Red Devils should have won it in extra time. But, somehow, thanks to luck, poor finishing and great goalkeeping, the game got to penalties, where Arsenal claimed the Cup.

But, while TFC did dominate the game in every way save for the scoreboard, there was an important things to note; that, for the second straight game, Sebastian Giovinco was poor. He fumed when he was subbed off in extra time, but he gave coach Greg Vanney little choice. Giovinco was ineffective in the second leg of the Eastern Conference final, and TFC’s big goals came after the Atomic Ant was subbed off. On Saturday night, he drew a lot of fouls, but it disguised the fact that his first touch was uncharacteristically heavy and that he left many passes short. As he struggled, Seattle could devote more attention to Altidore. Chad Marshall and Torres were very good — not perfect, by any means, but good enough — in dealing with the Reds.