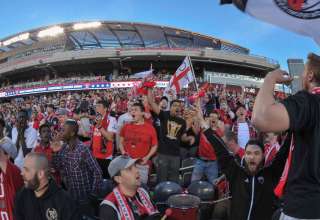 With its affiliation deal with the Montreal Impact, the Ottawa Fury is having its cake, and eating it too.

The two clubs ended the speculation Friday by announcing that, yes, they will affiliate. The Fury is moving to the USL from the NASL, and will offer some of its roster spots to the Impact’s young hopefuls.

But the teams were clear that this is not a case where the Fury becomes the Impact’s “2” team. The Fury will remain independent, which will allow Ottawa to be eligible to play in the Voyageurs Cup. In 2016, the Fury lost a hotly contested semifinal to the Vancouver Whitecaps.

“We are and will remain an independent club,” Fury coach Paul Dalglish said in a statement issued by the Fury. “We are proud of our identity and excited for the opportunities that this relationship will provide both of our organizations — including work on the player development pathway.”

The Impact will also play a friendly against the Fury in Ottawa some time in 2017.

The Fury already had 14 players under contract for the upcoming season, five of them Canadian (goalies Andrew MacRae and Callum Irving; fullback Eddie Edward, midfielder Jamar Dixon; forward Carl Haworth).  FC Montreal, which won’t be continuing, featured the most Canadian content out of any MLS, NASL or USL team last season. Montreal’s affiliate average nearly 900 minutes of game time for Canadians per match during the 2016 USL campaign.

This is important because the Fury will need strong Canadian content for the 2017 season, it’s just that we don’t know how much. Canada Soccer has yet to make public the roster rules that will govern the Fury for the 2017 USL season, in terms of how many Canadians Dalglish will need to play to stay on the right side of regulations. When asked about the roster rules, the  Fury’s front office has said that the roster-rule information has to come from Canada Soccer.

But, if the Impact and Ottawa were to face each other in the Voyageurs Cup, would Dalglish have lineup headaches? Would the Impact-loaned players be eligible? We’ve seen this happen in the past; the Whitecaps loaned Carlyle Mitchell to FC Edmonton, and he was not eligible to play against the ‘Caps in the VC – and he was miserable during the two games; he disliked seeing his current club and parent club squaring off.

The Fury’s front office says that the eligibility of each Montreal player will be set out in their contracts. There is no blanket policy that covers all loanees. So, if Ottawa and Montreal were to meet in a meaningful game, the status of the Impact loanees would be determined on a case-by-case basis.

As well, it will be interesting to see if there is any reaction from Fury fans who might be hyphenated Toronto FC supporters. How will they see their home team, now that it is partnering with TFC’s rival?

The elephant-in-the-room question is how this might affect the Canadian Premier League down the road. The indication we’ve heard from the yet-to-be-announced-but-out-there league is that it won’t have reserve teams. But what about an affiliate team?

And, indications from FC Edmonton is that, as of this week, are still not interested in joining the Canadian Premier League. No other interested parties have stepped forward from Edmonton.  So, talk of 12 cities being involved in CanPL may be a bit on the optimistic side.