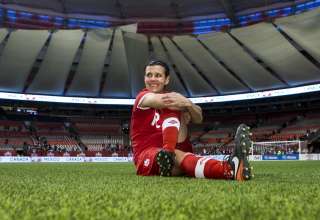 On a Canadian roster packed with young players, it was more of the same. Another winning goal from Christine Sinclair; she scored her 166th career goal for Canada, to give our women’s national team a 1-0 win over Denmark Wednesday in the opener of the Algarve Cup.

It wasn’t a vintage goal; Deanne Rose’s cross to the centre of the Danish penalty area was handled like a live grenade by Denmark’s defender, and the ball fell to Sinclair — who only needed to smash the ball home. But, considering she had a series of good scoring chances during the game, getting the garbage goal was just deserts.

Sinclair is second all-time in FIFA scoring, and we can only wonder where she’d be if:

Sinclair has seen many from her generation’s class of players retire; she’s now mentoring the likes of Rose and striker Janine Beckie. We have to question if Diana Matheson, the Canadian veteran who has so often linked up with Sinclair for goals in the past, will recover from a serious knee injury that will keep her out for the year.

Yet, Sinclair still scores — and hasn’t received the international recognition that she should. Put her on the American team, she’d be on cereal boxes and needing to buy a warehouse in which to store all her FIFA and CONCACAF awards.