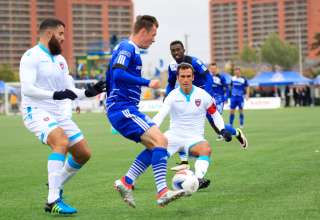 The New York Cosmos have released all of their players. The Jacksonville Armada have released players and have publicly stated that the club is exploring all the avenues necessary to ensure the club survives. The Carolina RailHawks have rebranded as North Carolina FC and have made MLS the team’s clear goal. The Tampa Bay Rowdies and Ottawa Fury have moved from NASL to USL, with rumours of more defections to come. The United States Soccer Federation has delayed sanctioning decisions on both USL and NASL because of the uncertainty that surrounds lower-division soccer on the continent.

Ball said the opening of the new team shop has helped boost ticket sales;  FCE players have been making public appearances at the shop, as has Canadian women’s national-team keeper Stephanie Labbe. In its season-ticket offer, the club has announced its intention to have a third jersey in 2017.

FCE owner Tom Fath has stated repeatedly that he believes the NASL will exist in 2017, and that FC Edmonton will be part of it. The team enjoyed its best ever-season in 2016, reaching the semifinals. Coach Colin Miller was rewarded with a three-year extension.

For those outside of Edmonton who may be baffled why the team is full-steam-ahead despite the uncertainty in the leagues, remember that Edmonton is very distant from all of the league meetings going on in the United States. The league issues have garnered zero mainstream media attention in Edmonton. Zilch.

Basically, if you’re going to have a crisis and don’t want anyone in Edmonton media to pay attention to it, do it during a hockey season where the Oilers are showing signs of life, and it’s even better to have it during the Christmas season. Connor McDavid almost ensures that, in December, no one is paying attention to any sport other than hockey.  Sports newsrooms are stretched covering hockey. When Christmas comes, Edmonton’s attention will be diverted somewhat from the Oilers — by the World Junior Hockey Championships.

But, to the supporters and the casual sports fans who’ve been to an FCE game or two, the club is giving off every impression that it is as stable as it has ever been. The team is hiring staff, there has been no break in season-ticket sales, the coach has been re-upped.

FCE has done very well controlling its message. And the result has higher ticket sales.

Of course, setting new sales records put more pressure on the franchise to play a full schedule in 2017. As indicated by Wes Burdine, for NASL to be dissolved it would need all of its owners to unanimously agree to kill it, and there are complicated formulas for exit fees.