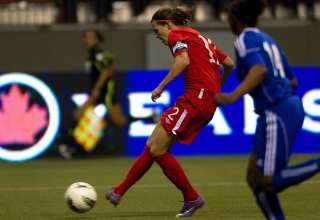 Christine Sinclair has won the Lou Marsh Award as Canada’s top athlete of 2012.

A panel of sports journalists from across the country vote on the award, which is presented by the Toronto Star, the paper where Marsh became a sportswriting legend.

Sinclair had already won the CBC athlete of the year award, which is voted on by fans.

Sinclair led the Olympic women’s soccer tournament in scoring, and notched a hat trick in a gut-wrenching 4-3 extra-time loss to the Americans in the semis. Canada went on to win bronze, just a year after going winless at the Women’s World Cup in Germany.

And she became a poster child for defiance when she accepted a four-game suspension for her public criticism of referee Christina Pedersen — who made a series of controversial calls in that 4-3 loss — but refused to apologize. And there is something that stirs the passion of Canadians when it comes to athletes who have performances for the ages against the Americans.

There will be those who would argue for cyclist Ryder Hesjedal, who won the Giro D’Italia. But, with doping stories continuing to dominate the headlines when it comes to cycling, the sport currently has about as much credibility as professional wrestling. And it makes it hard for Hesjedal to overcome the story of Canada’s poster child for soccer.

Speed skater Christine Nesbitt won world championships this season, but it’s hard for a Canadian winter-sport athlete (outside of hockey) to win the award in a non-Olympic year. Canadians generally ignore World Cups and world championships. While it’s not right, that is reality.

And trampolinist Rosie MacLennan, who won Canada’s only gold in London, didn’t have the media following or the us-against-the-Americans story that Sinclair had.

For a woman who has scored more than 140 international goals, this award is as much a lifetime achievement award as it is about her exploits with the Olympic team. Sinclair is the first soccer player to ever win the Lou Marsh. But, when you handicap the field, the choice was pretty clear.