The 11 wraps up its player-by-player analyses of the four Canadian first- and second-division pro teams with a stop in Edmonton.

Edmonton was just named the third-best city in the world for quality of life in a Numbeo study, and topped the Canadian quality of life list. Unfortunately, that quality didn’t extend to Clarke Stadium, where fans had to watch the team with the league’s highest payroll slump to the bottom of the NASL standings.

How bad was it? We put the Edmonton roster to the test, just as we have the three Canadian MLS teams: Montreal (CLICK), Toronto (CLICK) and Vancouver (CLICK). We took the minutes each player spent on the field, and came up with the team’s goal difference depending on who was on the pitch. (Think of a plus-minus in hockey) As well, we looked at each player’s W-L-T “record,” depending on the team’s performances in the matches they played.

We have not included FC Edmonton’s pair of Amway Canadian Championship matches against the Vancouver Whitecaps. This survey includes all 28 NASL matchups.

As FC Edmonton won just five of those 28 games and finished dead last in the NASL, the numbers aren’t expected to be pretty. But because FCE’s defensive-minded games resulted in a lot of low-scoring losses and draws, the minus numbers aren’t as severe as you might think.

But there are some surprises in what was a poor season:

• His loan from Colo-Colo was not renewed, but much-maligned forward Yashir Pinto’s numbers aren’t terrible. Yes, he missed many goalmouth chances in 2012, but FC Edmonton’s goal difference when he was on the field was zero. That put him well ahead of all of the FCE regulars. And, he played in all five of FCE’s wins.

• Meanwhile, French attacking midfielder Serisay Barthelemy had a very poor won-loss record with the Eddies. Out of 13 starts, the Eddies just won one of them. Compare that to Matt Lam, the player Barthelemy replaced. Lam started in three of the five Eddies’ wins, and came in as a sub in another win. Both Lam and Barthelemy are no longer Eddies.

• The list of Eddies who played in all five of the team’s wins: Pinto, midfielders Shaun Saiko, Kenny Caceros and Chris Kooy, and fullback Antonio Rago.

• Caceros had the worst goal difference at -13, but did play in all five Eddies wins. Fullback Kevin Hatchi, who was cut loose at the end of the season, was a -10, but played in just two victories. 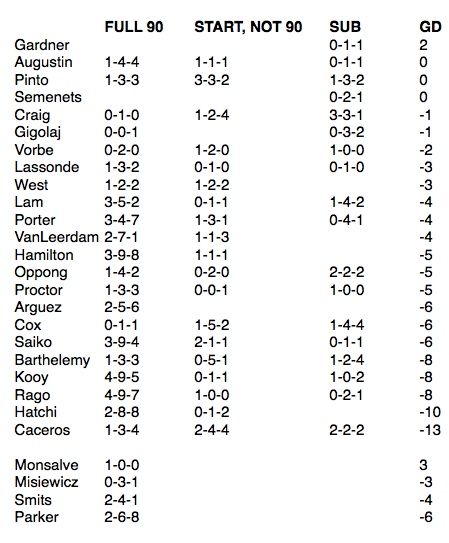