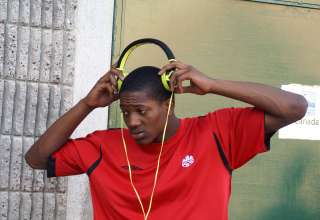 Toronto FC’s Doneil Henry won a close vote over Fortuna Dusseldorf’s Samuel Piette and claimed the title of Canada 2012 male U-20 player of the year.

As for Henry, the defender enjoyed a banner year. In games in which he played 90 minutes, Toronto FC was 3-3-2. He was also a key part of the Canadian U-23 squad that got to the semifinals of the Olympic qualifying tournament, only to lose to the eventual gold medalists from Mexico.

Henry scored a headed goal in Canada’s 2-0 win over the United States in that tournament.

“Doneil should be proud of being recognized a Canadian U-20 Player of the Year,” said Nick Dasovic, Canada’s men’s U-20 coach in a release issued by the Canadian Soccer Association. “I have seen him mature as a player and as a person on and off the field. His hard work, dedication and passion have been a driving force in helping him achieve this award. I wish him all the very best in achieving his ultimate dreams.”

Henry got 37.8 per cent of the vote, while Piette got 35.4 per cent. Piette’s play at the junior levels earned him a look-see from Stephen Hart at the senior national-team level, and he earned a switch to Dusseldorf, which returned to the Bundesliga in 2012. Piette is currently being groomed in the German side’s youth system.
D’Angelo helped Canada qualify for the U-20 Women’s World Cup, and posted a total of six clean sheets this season while wearing national-U-20-team colours.

She was named second-team all SEC Conference for her work at the University of South Carolina. She also received two call-ups to the senior national squad.

“Sabrina couldn’t be more deserving of this honour,” said Andrew Olivieri, Canada’s women’s U-20 coach in a release. “Her performances throughout the CONCACAF Championship and FIFA U-20 Women’s World Cup speak for themselves. The composure and consistency she continously showed were those of a mature goalkeeper beyond her years, so her inclusion in the national “A” team environment didn’t come as a surprise. I would like to wish her much success in the next steps of her career.”