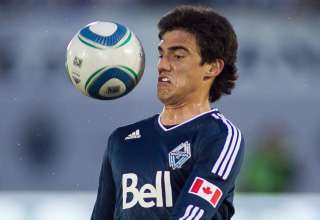 The Tale of Two Cities theme has been used to death in sportswriting.

But it is the most obvious way to look at the strategies employed by the two Canadian MLS sides as they prepare for Wednesday’s first leg of the Nutrilite Canadian Championship final.

Both the Vancouver Whitecaps and Toronto FC played Wednesday. Both were playing their third games in the matter of seven days.

But, with the NCC final on the horizon, TFC technical director Aron Winter and Whitecaps’ coach Teitur Thordarson approached their MLS chores Saturday with much different game plans.

Winter started what he felt was the best XI available to him, watching his side blow a 2-0 lead to Chicago, settling for a disappointing 2-2 draw.

But Thordarson decided to use Saturday’s date in New England as a chance to test his squad players. Striker Long Tan, who any Whitecaps fans would be forgiven for not remembering still played for the club, got the start with attack partner Omar Salgado, the teenager chosen first overall in the 2011 Superdraft.

The Revs won 1-0, as Shalrie Joseph converted a penalty kick after Whitecap Blake Wagner was adjudged to have stepped on the foot of Rev Benny Feilhaber just inside the box.

Salgado conjured up the best scoring chance of the first half, turning and unleashing a low drive with his left foot that skidded on the wet FieldTurf in New England. In the second half, New England keeper Matt Reis scrambled to deflect a headed effort from Salgado just wide of the post.

Teenager Russell Teibert got the start on the left side of midfield, while Shea Salinas got the nod on the right side. Davide Chiumiento, the Whitecaps’ playmaker and clearly the team’s best player at the moment, didn’t start. He came into the game with 11 minutes left. Midfield general Terry Dunfield sat. Jay DeMerit, returning from injury, was pulled after putting in 63 minutes of work. Defender Alain Rochat and striker Eric Hassli didn’t even make the road trip.

Clearly, the statement made here was that the Whitecaps’ were willing to make a sacrifice of a league game in New England in order to have a fresh starting XI for Wednesday’s NCC date with Toronto FC. And New England presented the perfect opportunity to test the Whitecaps’ depth; the Revs hadn’t scored in two previous matches. And, outside the penalty, the Revs created only one other chance of note, an 82nd minute drive from inside the box from Sainey Nyassi that ‘Caps keeper Jay Nolly did well to get a hand to. So, Thordarson was facing an attack that didn’t necessarily scare, well, anyone in MLS.

Even though the Whitecaps haven’t won an MLS match since week one of the regular season, there isn’t a lot of pressure on Thordarson. No fair-minded fan would expect the Whitecaps to be a contender in year one of their MLS lives.

Winter is dealing with a disgruntled fan base; his injection of Dutch class into TFC has given him a longer leash, but he’s being judged game in, game out. BMO Field has empty seats. He can’t afford to play an MLS match with squad members.

So, knowing from game one of the season that he’s got the talent to beat TFC, Thordarson decided to make a statement in Foxboro on Saturday; that the NCC is his priority over the next two weeks. It’s a luxury that Winter can’t afford.

If, two Wednesdays from now, the Whitecaps triumph over TFC and capture the Voyageurs’ Cup, the loss in New England will be seen as a minor bump in the Whitecaps’ season — and a good gamble by Thordarson.