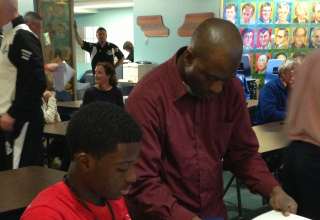 The team also unveiled its newest member of the coaching staff, Angelo Sestito. And, director of soccer Joe Petrone promised that a new head coach would be in place by the end of November.

FC Edmonton will host a combine for unsigned Canadian players and CIS prospects Nov. 28-30 at the Commonwealth Recreation Centre. Petrone said a coach will need to be in place to assess those players.

Former coach Harry Sinkgraven’s contract was chopped after the end of the 2012 season, in which the Eddies won just five times. The team and Sinkgraven cited budget cuts for the dismissal, as FCE is expected to chop its budget by 30-35 per cent for the 2013 season.

With the loss of Sinkgraven and former assistant Hans Schrijver, assistant Jeff Paulus, who looked after the Reserve team in 2012 and didn’t travel, will be spending more time with the senior club in 2013. That means he will travel with the team. So Sestito, the technical director of the Edmonton Drillers, will come in as the new assistant. He will work with the reserves and run the program when Paulus is away on road trips with FCE.

Sestito played for the Edmonton Drillers of the indoor National Professional Soccer League during the ‘90s.

Now, with Paulus and Sestito, the Eddies have two Canadian coaches on staff.

“This is a huge opportunity for me to be able to work in a professional organization,” said Sestito. “And it means a lot to be able to do it right here in Edmonton. It is going to be a challenge.”

Sestito understands that he’s a rarity, a Canadian coach to actually work in the pro ranks.

“There are so few of these opportunities around,” he said. “There are only three or four professional clubs in Canada, so there is a real limit to where you can go.”

And he’s frank about the job that he and Paulus have to do.

“It’s definitely our job to get the kids to the next level. If we are not graduating kids to that next level, then we’re not doing our job.”

Petrone said that “two or three” members of the Reserve squad will graduate to the senior team for 2013.