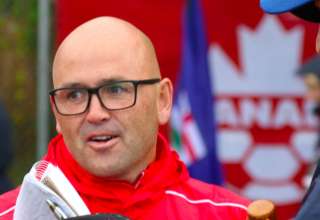 Over the years, the Voyageurs Cup — or, Amway Canadian Championship, or #VCup or whatever else you want to call this country’s national soccer championship — has given us many bizarre-yet-memorable games.

There was Will Johnson’s last-gasp leg-breaker goal that decided the 2016 nal in Toronto FC’s favour; the infamous rain-out at BMO Field; the Miracle in Montreal; FC Edmonton defying the odds by being eliminated in consecutive years by second-leg winning goals that came after the 97th minute.

When it comes to drama, the five-team tournament has certainly over- performed.

But that’s the rub. It’s a five-team tournament. And a Cup tournament with just ve teams is a hard sell, no matter how much drama you can pack into such a compressed event.

Hopefully, when (and if) the Canadian Premier League launches, the tournament will be infused with new teams, new rivalries and new upset possibilities.

But, we’ve missed so many opportunities to improve the tournament. How great would it be to see the winner of the Division-3 League 1 Ontario or the Quebec league get berths in the tournament?

And what of the Challenge Cup winner? Year after year, the team that wins the senior men’s amateur title is one that has links to pro soccer and the Canadian national-team program. There are former national-team and/or pro players who got real jobs and had families, but still remain in love with the game. There are former and current CIS standouts. There is quality in those teams.

In this issue (issue 11 of Plastic Pitch), you’ll find Kevin Poissant, the technical director of current Challenge Cup holders Edmonton Scottish, championing the idea that his side deserves an invite to the Canadian Championship.

Think about it: Scottish elded four former FC Edmonton players in its run to the Challenge Cup title. Imagine if Scottish and FC Edmonton had to play each other?

The storylines would be numerous. Former Eddies against current Eddies. A crosstown rivalry. Even for those outside of Edmonton, a real derby match, a David against a Goliath, would probably create more interest than any other early-round Voyageurs Cup tie has in the past.

One leg on Edmonton’s south side. One leg on the north side. Friends becoming rivals.

It’s what Cup football is all about, isn’t it?