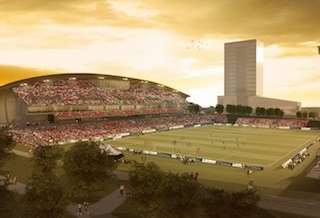 It has been a good week for John Pugh, the owner of Ottawa’s NASL franchise.

On Monday, the Ontario Court of Appeal unanimously struck down an attempt by Friends of Lansdowne to halt the planned redevelopment of Frank Clair Stadium, which is expected to host both NASL soccer and CFL action in 2014. The court did not agree with the F of L claims that the partnership between the City of Ottawa and the Ottawa Sports and Entertainment Group constituted an illegal subsidization of private business by city hall.

With that good news, Pugh is ready for NASL action to begin in Ottawa in 2014. But he told The 11 on Tuesday that, even though commissioner David Downs has said Ottawa is free to play the 2013 season in a temporary facility, the franchise wants to do things right and kick off its NASL life in the revamped Landsdowne facility. That means Ottawa will wait out the 2013 season.

“Really, there isn’t a stadium in the city that is suitable (to be a temporary home to NASL),” said Pugh. “I know it’s hard to believe that in the Capital City, there is no other stadium, but that is the case. So, we considered our options and thought the way to go is to begin play in what will be our permanent home.”

For the stadium opponents, there is one more option available, the Supreme Court of Canada. But, because the Ontario court was unanimous in rejecting the group’s appeal, and the fact the Supreme Court usually hears cases that have a national interest, a bettor wouldn’t put money on Friends of Lansdowne slowing down the process any more than it has so far.

So, now the job is to get all the ducks in a row. Many of the promotions and business staff from the Ottawa 67’s junior hockey club will work with the soccer club. And, Pugh wants to have a head coach in place by 2013, even though the club won’t play in NASL till 2014.

“I’d like to have the coach in place a full season before we start playing,” said Pugh. “But the key is to make sure we find the right person.”

But, as the 67’s, the soccer club and the new CFL team will all be under the same umbrella, Pugh said there will be plenty of chances to expose soccer to fans of the other sports. Expect to see ticket packages that include tickets to see all three teams. Expect to see heavy cross-promotions.

“Definitely, we are going to build the synergies between the three teams,” said Pugh.

He even wouldn’t rule out the fact that the CFL team and soccer club could have the same name and colours. Likely, the name will come from a fan contest, but the brass could choose to pick just one winner rather than two.

“You know, we see this in Europe. Real Madrid and Barcelona have not just soccer, but basketball and other sports. So, we wouldn’t rule that out. We’d keep an open mind.”

While Ottawa is not yet playing in NASL, the club is a full voting member of the league. And, it is taking the time to look at where other teams are successful. Of course, an eye is kept on Edmonton, the other Canadian team in the league. But, as well, Ottawa is looking to San Antonio, the expansion team that is averaging more than 11,000 per home game.

“We do look at Edmonton. They are a Canadian team and they are taking the exact same route we want to take in terms of developing a team. But, also, San Antonio are doing some things that haven’t been done before. They are engaging their community in powerful and unique ways. The way they did the jersey unveiling (which included a design-the-logo contest), the name-the-team contest. We would like to be in the same situation as an expansion team. They have been a worthy replacement for Montreal in NASL.”