May 16, 2022
9 New Articles
Home NASL & USL FC Edmonton FCE focused on not allowing Whitecaps to get an away goal 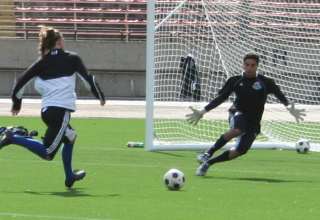 The Whitecaps are bringing pretty much a full-strength lineup to Edmonton outside of midfielder Camilo and defender Jay DeMerit — who were both omitted from the Whitecaps’ team sheet for the game. FC Edmonton coach Harry Sinkgraven conceded that the MLS side is bigger and stronger than FCE, whose mobile-but-small backline struggled in its last NASL match against Minnesota’s six-foot-plus strikers. So, for Edmonton, the key will be to focus on the likes of Eric Hassli, Sebastien Le Toux and Omar Salgado — depending on who Vancouver chooses to start — and keeping them off the scoresheet.

FC Edmonton coach Harry Sinkgraven said that he told his squad of his exploits in European Cup matches.

“Twice in first game, we won 1-0. If you keep a clean sheet in the home game, and just score one goal away from home, then the opposition has to make three goals,” Sinkgraven said Tuesday.

“We are focused on keeping a clean sheet,” said FCE midfielder Shaun Saiko after practice wrapped up at Commonwealth Stadium.

“They have a lot of big, strong strikers,” said defender Paul Hamilton. “We hope that we get one on the counterattack.”

And that means the most important man on the pitch could be David Monsalve, who has been confirmed as the starting keeper for Wednesday night. An ankle injury kept Monsalve out of FCE’s first four NASL matches of the season, but he is ready to take the No. 1 role. Goalie Lance Parker, out for 10 and a half months after a compound fracture to his arm — and then a stress fracture in his left foot as he rehabbed from the arm injury — is also available.

Vancouver isn’t unfamiliar to Edmonton; the Eddies had a heated rivalry with the Carolina RailHawks last season. And, Whitecaps’ coach Martin Rennie has brought a similar, physical style to Vancouver as he brought to Carolina. In fact, Edmonton and Carolina has several mix-ups and battles in the tunnels during their games last season. Hamilton said there “would be no love lost” if certain ex-RailHawks played against the Eddies on Wednesday.

“They are a more physical team, we are a more technical team,” said Sinkgraven. But he warned that Edmonton will have to do much better defending set pieces than it did against Minnesota a week and a half ago, because of the “length and power” in the Whitecaps’ lineup.

But Edmonton can look back and say that it did OK against Toronto FC when it has 11 men. In 110 minutes of 11 vs. 11 football against TFC last season, the Eddies were outscored 1-0. The problem was, the Eddies spent most of the first leg down to 10 men because of a red card to Saiko.

“I put my team in a bad spot last year,” said Saiko. “This year, I want to make amends for it.”

Chilean forward Yashir Pinto, who got two assists against Minnesota, wasn’t at practice. He was in Calgary working on getting his U.S. immigration paperwork signed, sealed and delivered. He still is not eligible to play in games on American soil. But he will be back to likely play up front with Saiko and Kyle Porter. Porter and Saiko both scored on Pinto assists against the Stars.

“We had a bit of chemistry,” said Saiko. “I am looking forward to building some more.”

FCE staff said a crowd of 7,000 is expected for the match.