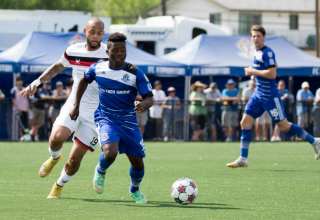 The Ottawa Fury faced the Atlanta Silverbacks on the final weekend of the 2015 NASL regular season. During the visit, Fury assistant coach Martin Nash developed a rapport with then-Silverback Kyle Porter.

As Porter, a Mississauga, Ont. native who has been capped by the Canadian national team, looked for work in the off-season, he kept in contact with Nash — and soon both the player and the Fury came to realize they were the best fits for each other. On Wednesday, the Fury announced they had signed Porter.

Porter and fellow Canadian Dominic Oppong played for the Silverbacks in 2015; in fact, Porter got more playing time than any other Canadian in MLS or NASL last season. But the Silverbacks players knew that they might be on borrowed time; the NASL ran the Silverbacks last season and, in 2016, they pulled the plug — deciding against bankrolling the team for a second season.

“Everyone was aware of the situation,” said Porter. “We were league-owned last year and we all knew they were trying to pursue a local owner.”

Attakora has since signed with the Fort Lauderdale Strikers, while Smits — a former Golden Glove winner for having the top goals-against average in NASL — has been linked to a USL club.

Porter said he had some interest from USL, NASL and MLS teams, but Ottawa — being a Canadian team — was the most realistic option.

“I had some MLS clubs interested in me, but the international rule really helped to squander those chances for me,” he said. “People don’t really understand just how difficult it is for a Canadian player because of the international rule. I spent a lot of time in the United States, I tried to get a green card, but it didn’t work out for me.”

And Porter offers versatility. He’s a speedy player who can play as a striker, as a winger or as a fullback. This season, Atlanta coach Gary Smith moved him to the wing-back slot and it ended up being a great fit. “I really enjoyed working with Gary Smith,” said Porter. “Atlanta didn’t have as deep a squad as the other teams in the league, so I told the coach that I would go anywhere that he needed me to be.”

And so, Porter went backwards in the formation, but it might be a move that propels his career forwards. When he spoke with Ottawa coach Paul Dalglish, the discussion was that he could slot in at fullback this season.