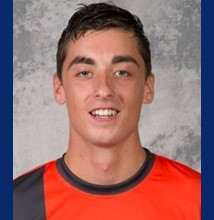 Nathan Ingham had a choice to make.

But, Ingham also had an invite to the MLS combine. He’d been named tournament MVP of the 2015 PDL Championship weekend, where he helped Kitchener-Waterloo United to the title. In his final year with FGCU, Ingham started 12 games and posted a save percentage of .800.

He only had a few days to make his decision: Take a chance on the MLS Combine and hope to get drafted — or take the solid offer from the NASL team?

“It ended up being a pretty easy decision to make,” said Ingham, whose signing was announced by the Eddies on Wednesday, along with the capture of Brazilian midfielder Gustavo Salgueiro.

A Canadian keeper wanted to play with a Canadian team — and Ingham said those factors really played in Edmonton’s favour.

Ingham will arrive in Edmonton next week and prepare for training camp by spending some time working with the reserves. But he isn’t short on confidence.

“The fact that he left the MLS Combine behind shows that we’re doing a good job with our keepers,” said FCE coach Colin Miller.

He said that Ingham’s impressive PDL résumé is similar to that of FCE keeper Tyson Farago, who came from WSA Winnipeg. “The first thing that jumps out at you is that his stats compare to the numbers Tyson had posted when he was playing in the PDL.”

Ingham said that the K-W United program has become a soccer development hotbed. K-W United alumni Ben Polk and Julian Buescher, an American and a German who played in Ontario, were taken in the first round of the 2016 MLS SuperDraft.

Ingham, said credit has to go to K-W owners Barry MacLean and Gill Heidary for sticking with a vision to make the club a prime spot for North American players to develop their skills.

“They did an unbelievable job of building a team and making it feel like a family. We were always pushed to be the best that we can be.”

And, after the signing was announced, Ingham said he’s received plenty of calls from K-W United staff and players who want to congratulate him on the move.

Meanwhile, Gustavo is a 30-year-old veteran attacking midfielder who can also play on the left side, a spot which needs to be filled after the departure of 2015 leading scorer Lance Laing to Minnesota United FC. He’s a veteran of Brazilian league football, but Gustavo has also appeared in Poland with Widzew Lodz and in the Ukraine with Volyn Lutsk.