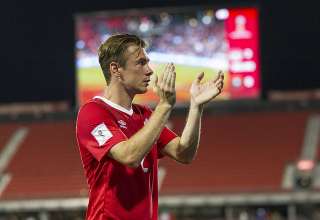 Nik Ledgerwood felt the time was right to come back home.

If he extended his career in Germany by a few more seasons, he’d be well into his 30s. But, right now, at 30 years of age, he can come to a young team and be both a role model and provide many quality minutes on the pitch.

On Tuesday, FC Edmonton announced that the Lethbridge, Alta.-born midfielder/defender and national team mainstay had inked a deal with the club.

For the better part of the last 14 years, Ledgerwood has played his club football in Germany, most recently with Energie Cottbus. But he really pined to be closer to his family in Alberta — and he’d heard nothing but good things about the NASL from both FCE coach Colin Miller, who spent time as the interim coach of the national side, and national-team midfielder Julian de Guzman, who played for Ottawa last season and will play there again in 2016.

“I think there were a lot of things that came together quite well,” said Ledgerwood over the phone from Lethbridge, where he’s spending time at home and training for the upcoming season. “I’m a family guy. Family is very important to me.” Ledgerwood’s brother lives in Edmonton; his sister lives in Calgary. The fact that they can both regularly make it to Clarke Field to watch games is important to FCE’s newest signing.

“I want to be part of Alberta soccer, of Canadian soccer, moving forward,” said Ledgerwood. “I feel I have a lot more to offer. And, from talking to Colin, I believe that Edmonton is an ambitious club.”

He said that he feels he can be a strong veteran presence for the club; with Edmonton having so many young Canadians in the system, Ledgerwood has a story to which they can relate — a kid from Alberta who ended up having a successful career in Europe.

Ledgerwood spoke to JDG about NASL — and JDG was a good ambassador for the league.

“He had good things to say about the clubs and about the league,” said Ledgerwood. “There are some good professional organizations in NASL. It’s an interesting league, I know it has some ambitious plans to expand. And it’s a league that’s been good to Canadians; both Edmonton and Ottawa promote Canadian talent.”

Ledgerwood says the opportunities Canadian players get in Ottawa and Edmonton simply don’t happen with the Canada-based MLS sides.

“It’s always been that way with MLS clubs in Canada. There could be opportunities for Canadians in MLS but it just doesn’t happen. But it’s a league that’s linked with U.S.”

While Ledgerwood has played fullback many times for the Canadian national team, it looks as if FCE will utilize him as a holding midfielder, where he generally spends his time as a professional. But, Ledgerwood offers versatility to the club. It also needs to be said that right back Eddie Edward also came in and did a good job at the holding midfield spot late in the 2015 season.

“When I became interim head coach of the Canadian national team I had the chance to get to know Nik that little bit better,” FC Edmonton coach Colin Miller was quoted in a release issued by the club. “He was one that was so reliable and we will look at him to be a central midfield player for us. Nik will give us experience, he will give us tenacity and he will raise the bar in terms of the level of professionalism.”