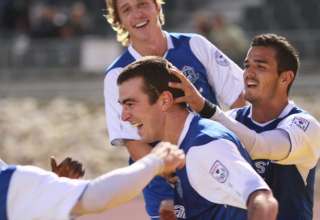 FC Edmonton spurned numerous scoring chances — and paid for it.

In a game the Eddies needed to win to improve their chances of home-field advantage in the first round of the playoffs, they surrendered a 1-0 lead and lost 2-1 to the Fort Lauderdale Strikers in the regular season finale at Foote Field.

Edmonton now trails the Strikers by a point in the battle for fourth and home-field advantage in the playoffs. But the Strikers have a game in hand, which sees them face the last-place Atlanta Silverbacks next weekend. If they win that, FC Edmonton can’t catch them.

The Eddies have one game left, a road date against Montreal.

But while Brian Shriver got the winning goal, the real culprit in FCE’s loss was the Eddies’ own inefficiency in front of goal.

In a game that featured both teams crowding the midfield, space was at a premium on the tiny Foote Field pitch. FCE coach Harry Sinkgraven went with a 4-5-1 setup, while Fort Lauderdale lined men across the midfield, daring FCE to play through them.

In game so tight, set pieces are so, so important — and the Strikers struggled mightily. On corners and free kicks, FCE players were regularly first to the ball, and the Eddies had numerous open headers from inside the area.

“We thought they can be beat in the air in the back,” said assistant coach Dave Randall.

Problem is, FCE only scored on one of their numerous chances.

Late in the first half, a free kick from Alex Surprenant came to the back post. Defender Paul Hamilton, unmarked at the far post, headed the ball across the goal, where an unmarked (sense a pattern here?) steered the ball into goal.

But, before the goal, it would be easy to lose count of the times the Eddies fluffed their lines in front of goal. Hamilton had an open header go wide. Chris Kooy had two open headers from point-blank range, and didn’t hit the net with either. Kyle Yamada sent a headed effort just wide.

“We scored on one (set piece) but, to be honest, we should have scored more than one,” said midfielder Shaun Saiko.

FCE was punished for it in the second half. Fort Lauderdale began establishing itself by attacking the Eddies down the wings. In the 69th minute, midfielder Mike Palacio was left wide open on the left wing as the Strikers attacked down the middle. When the ball was sprayed out to him, he was left open to hammer a shot on goal. Facing his own goal, Hamilton tried to clear the ball that was skidding at him on the hard turf. He was able to only redirect the ball into his own goal.

With Fort Lauderdale gaining in confidence, Edmonton’s attacks became more infrequent; but Saiko had a fantastic chance to steal a late winner; his venomous drive from the top of the area was parried over the bar by Strikers’ keeper Nic Platter.

That set up the Strikers for a heck of a photo finish. A long ball was played up the middle. FC Edmonton right back Antonio Rago got the first touch as he battled Strikers forward Brian Shriver one on one; but Shriver stuck with it and outmuscled Rago.

Stumbling along, Shriver had the presence of mind to get around FCE keeper Rein Baart and, as he was falling, was able to break the hearts of the 1,686 home fans by steering the ball into an open goal.

“You want to finish off an opponent but we conceded two ugly goals,” said Saiko.