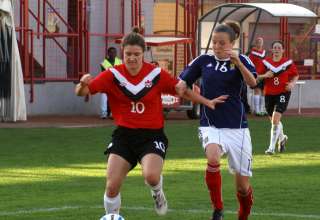 But, because so many of the Fury’s players, including Outerbridge, have NCAA commitments, only one member of the Ottawa team that lost the W-League championship game to Atlanta is part of the roster that new Canadian women’s coach John Herdman will utilize in friendlies Sept. 17 and 22 against the United States.

Outerbridge, who has six goals and two assists in just seven starts at Western Kentucky University, wasn’t going to be made available for Herdman, even though the new coach is going to have the chance to look at some new faces.

“We will start to lay the foundation for a fresh start,” said Herdman through the Canadian Soccer Association website. “We will have a look at our pool of players as well as some of the young players.”

Canadian player of the year Christine Sinclair and defender Candace Chapman will skip the friendlies; they won the WPS title with the Western New York Flash and need some rest.

While the Fury had just Christina Julien make the Canadian roster — the Vancouver Whitecaps sent seven. At a cursory glance, it seems strange that the better of the two W-League programs sends just one player, while the other sends seven. But, again, Ottawa has a very young roster and sources indicated that current NCAA commitments played massive roles in the selection process.

So, Canadian fans will have to wait a little longer to see Outerbridge make her impact on the women’s national side. That’s the young player who needs to be part of that foundation for the fresh start of which Herdman speaks. But for the Regina, Sask. native, it’s just a matter of when she’s going to get the call.