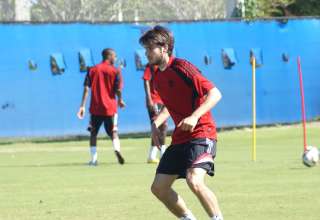 Pisanjuk is currently in Sunrise, Fla., one of 18 players selected by national U-23 coach Tony Fonseca to take part in the identification camp, the first step to the squad that will be created to challenge for a spot in the 2012 London Olympics.

As a former member of the U-20 squad, Pisanjuk is one of the promising young strikers being groomed for a possible shot at the senior national team. And he relishes the chance to represent Canada again.

“A lot of similar faces, and a few new ones (at the camp),” Pisanjuk told The 11 via e-mail. “And the obvious challenge is that everyone is getting bigger and better, so I gotta keep working hard and focus even more because it doesn’t get easier!

“Actually I got the call on my birthday (Oct. 24, the day he turned 21) so when I got the good news i was very excited and anxious to play with the national team again!”

Pisanjuk doesn’t get the kind of press or blog mentions dedicated to other young players in the Canadian set-up; that’s because he’s spent his formative soccer years in Hungary. How did a teenager playing at Erin Mills Soccer Club attract the attention of the only Hungarian side to ever win a major European trophy, the team that was home to 1967 European Player of the Year Florian Albert?

Erin Mills’ coach is Josef Komlodi, a Hungarian-Canadian who is so fond of Ferencvaros, that EMSC boasts the green-eagle logo of the Budapest club. He knew he had a very special property in Pisanjuk and, in 2007, helped facilitate a deal to send the then raw, teenage talent to Hungary.

Ferencvaros went through some tough times in the last decade; the club was relegated to the second division for financial improprieties, and was near bankruptcy when it was rescued by Sheffield United owner Kevin McCabe. Fradi is affiliated with SUFC, which has sent young players from England to Hungary to get regular starting assignments.

Ferencvaros is now back in the first division.

During the 2009-10, Pisanjuk was a victim of the numbers game; he couldn’t find a way into the first team, so the club loaned him out to second-division side Szolnok. Pisanjuk scored nine times in 13 games to help Szolnok’s promotion to the first division. This season, the loan was renewed. But, the jump has proven difficult for the small Hungarian team, which often plays to home crowds of less than 1,000. It is right now in last place in the 16-team NB1, with just eight points from its first 13 games.

“I will be back in Fradi in January to fight for my place,” wrote Pisanjuk. “But we will see what happens!

“I don’t really know Teal well,” stated Pisanjuk. “I was at the U-20 camp with him only for a couple of days. Personally, I would play for canada even if I got another call because I’ve lived in Canada for most my life.”