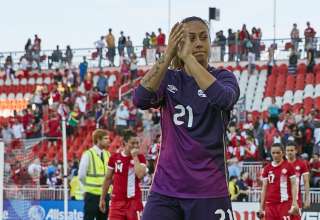 The allocations for the 2017 season were announced Wednesday. This year, the Canadian Soccer Association will subsidize the salary of 10 players. They are.

Obviously, this number has been affected by the long-term injury to keeper Erin McLeod, and the fact that defender Kadeisha Buchanan and fullback Ashley Lawrence both decided to make their professional debuts in France rather than NWSL.

Canada has the right to subsidize up to 16 players in the NWSL. But, in recent years, the number hasn’t been reached.

So, over the course of five seasons, Canada has gone from using 16 spots to 10. But, yes, some of that has to do with the fact that Canadians are going to Europe, and that many of the key players in the Canadian program are so young, they are still in school — think of teenagers like Deanne Rose and Jessie Fleming. The youngest subsidized players are 21 years of age each — and some of this country’s brightest young stars from the 2016 Olympics are still in their teens.