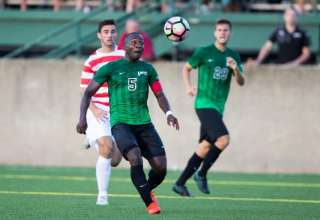 The Ottawa Fury announced the signing of Sergio Manesio on Wednesday. The addition of the former Tottenham and West Bromwich Albion youth player brings the roster to 17 ahead of the team’s USL season.

Now, there’s no reason to hit the panic button for those of us who freak out about Canadian content on Canadian teams. The Fury have an affiliation deal with the Montreal Impact, and the roster will no doubt be filled out with many youth prospects from the MLS side. And, FC Montreal, the Impact’s former USL side, led all Canadian teams in terms of playing Canadians in 2016 —  almost 90 per cent of the team’s youth prospects are Canadian. So, when Montreal’s players are injected into the roster, the Can-con will be boosted.

But it is interesting that the team has already signed 12 foreigners — though, with the January window about to close, the Fury has to get its international business out of the way.

But the fact that there are a dozen non-Canadian-team-eligible players already signed to the Fury roster tells us something.

Remember that the rules for Toronto FC II and VWFC2 require that more than half of their rosters be Canadian-national-team-eligible players. And, over the course of the USL season, they must play — on average — six of 11 Canadian starters. To make that simple, that’s 540 minutes of playing time per game to Canadians.

The Fury made the move from NASL to USL for the 2017 season, and the question was if Ottawa was going to deal with similar restrictions. Having a dozen foreigners on the roster suggests that the team won’t have to.

This is not meant to be a criticism of the Fury; playing in NASL last season, the Fury averaged more than 347 minutes of playing time for Canadians. No other Canadian team in MLS or NASL even came close to that number. If any team in the planned Canadian Premier League could give an average of 347 minutes to Canadian players per game, it would be applauded. And the Fury maintained that number despite playing in a U.S.-dominated circuit.

If anything, this is a criticism of the secrecy around the Fury’s roster obligations for 2017. A press release or a statement should have come out when the team’s move was approved by the Canadian Soccer Association. This site has often criticized NASL and MLS for their lack of transparency in the past; so, we need to ask the same questions this time around.