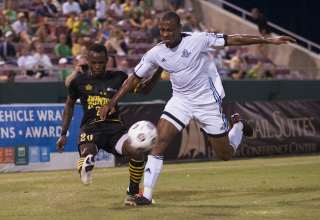 With 15 minutes left in a 1-1 game, Tampa Bay Rowdies striker Etienne Barbara steamed towards the FC Edmonton goal, taking advantage out of a giveaway in the back.

FCE central defender Albert Watson caught up to the 2011 NASL MVP in the Eddies’ penalty area. The two lined up shoulder-to-shoulder, and Barbara went down. Barbara looked back to referee Fotis Bazakos, expecting a penalty that could have given the Rowdies the win.

Instead, Bazakos waved away the appeal, and Chris Nurse’s goal — his second in two games — stood as the equalizer, as the Eddies and Rowdies played to a 1-1 draw on a windy night on the bumpy pitch at Al Laing Stadium.

“I said on the broadcast that I thought the quality of the officiating was very poor,” said FCE coach Colin Miller after the match. “And, I thought at it was as bad for them as it was for us. Some of the decisions out there were shocking. But on the Barbara challenge, he goes down, screaming like a stuck pig, and when he doesn’t get the penalty he pops straight back up. To me there was nothing in it.”

Luke Mulholland, a player who has consistently given the Eddies fits over the past two and half seasons, scored the opener in the 38th minute, taking advantage of a defensive lapse. FC Edmonton keeper Lance Parker did well to save Mulholland’s first effort, but the Rowdie stuck with the chance, got to the rebound, and made no mistake the second time ‘round.

Mulholland could have had the Rowdies up two minutes later. He was able to chip a ball over Parker that looked like it was going to drop across the line, just inside the post. But central defender Mallan Roberts got back to deflect the ball just enough to knock it outside the upright.

Mulholland was also thwarted earlier in the game, in the 11th minute, when Parker was forced to make a fingertip save on a shot from outside the box.

But the other Rowdies’ attackers could not match Mulholland’s energy and craft. With the wind at their backs — in fact, it was so severe that one of the dugouts had to be taken away and the other was held down by sandbags —the Rowdies tried time after time to dink the ball over the heads of the FCE defenders. But, the physical Eddies were able to deal with the challenges.

And, right before the end of the half, in time added on, FCE striker Michael Cox, the whole of the Rowdies back four and keeper Diego Restrepo came together in the box, and the ball came loose. With players strewn over the field, Nurse hammered a shot inside the post to tie the game. Last week, he headed home the equalizing goal against Atlanta.

Nurse was needed to boos the attack. Cox regained his starting job at the top of the formation, at least for the week, while Anthony Adur was dropped to the subs’ bench. Daryl Fordyce played behind Cox while Corey Hertzog went out wide. Shaun Saiko was left at home to nurse an injury, while winger Massimo Mirabelli’s absence was a coach’s decision.

Attacking midfielder Gagandeep Dosanjh, signed during the July off-season, made his professional debut, coming in as a second-half sub for Robert Garrett.

In the second half, Mulholland (again!) had another great chance to put the Rowdies ahead. His shot went right through Parker’s hands, but Watson was there to clear the ball off the line. Mulholland could have had a hat trick, but each of the Eddies’ central defenders stopped chances on the line. The clearance sent Edmonton off on a four-on-two rush, but a poor pass from Garrett was intercepted by Rowdies’ defender Frankie Sanfilippo.

In the 79th, Watson had to leave, as fatigue had put his bad hamstring in peril — and, early in the fall season, it was better to be cautious than risk losing the team captain for a long period. But Miller said defender David Proctor did excellent work as the sub.

The Eddies would have one more chance; Adur, who came on for Cox late in the game, threaded a ball through to Fordyce in time added on. But, going for placement over power, Fordyce saw his chance thwarted by a diving Restrepo.