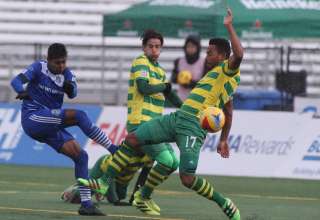 The Eddies will play in the post-season. And they haven’t given up the chase of the New York Cosmos for the NASL’s No. 1 seed.

Thanks to a headed goal from Ben Fisk and a league-record-setting 15th clean sheet from Matt Van Oekel, the Eddies beat the Tampa Bay Rowdies 1-0 Sunday in wintry conditions at Clarke Field. The win clinched a playoff spot for the Eddies with four games to spare on the season. But FCE came into Sunday’s game with a bigger goal in mind; catching the Cosmos and earning home-field advantage throughout the playoffs.

With the Cosmos only being able to manage a draw with Ottawa, the Eddies are five points back in the Fall Season standings, but have a game in hand.

“That was our team talk before the game,” said FCE coach Colin Miller. “We knew we had a good chance of qualification for the playoffs. We knew that there would have to be a horrendous implosion for us not to qualify. But the incentive, before the game, was to catch the Cosmos. Until it’s mathematically impossible, that was our incentive. If we got three points today, it meant we were closer to the New York Cosmos because we knew the score in the Ottawa game (1-1). So that was the incentive to continue to do well; not just win and get into the playoffs — that’s great and that’s an absolutely fantastic accomplishment — but can we still hang on the coattails of the Cosmos and can we pass them?”

The officials made the decision to make this the first game in the history of NASL to utilize a coloured ball for snowy conditions. A yellow ball was used, even though crews spent four hours clearing the snow from Clarke Field. The officiating crew felt that, with white snowbanks around the field, it would be best not to use a white ball.

The game kicked off in snowy conditions, with temperatures at -1 C. The artificial turf was slick, and throughout the game players fell over as if they were losing edges on skates.

But, soon after the Eddies missed a golden chance, with Shamit Shome not able to knock in a low cross from Tomi Ameobi, Fisk gave the home side in the lead. In the 13th minute, Dustin Corea made a run down the left sideline and drove the ball into the penalty area. Fisk cut in front of his marker, got his head to the ball, and it bounded into the corner of the goal.

For Fisk, it was the second straight game where he scored the winning goal. After the game, he was talking about the bigger picture.

“Hopefully (FC Edmonton’s success) bring some attention to Canadian soccer,” said Fisk. “Obviously, with the CSA (Canadian Soccer Association) trying to fight for Canadian players not to count as internationals, it might be a big talking point as well. I think it’s massive for the club and Canadian soccer, as well.”

Hailing from Vancouver and having spent the last couple of years in Spain, Fisk found the bone-chilling conditions to be challenging.

“I’m a Canadian kid who’s not used to conditions like this,” he said. “It was pretty cold. There were a few runs, tracking back on the fullback, the snow was blowing in my face and I could barely see.”

The Rowdies got an excellent chance to draw level right before halftime. After the ball took a couple of crazy bounces in the penalty area, it fell to the feet of Keith Savage in front of the FCE goal. But he screwed his shot wide.

Throughout the game, the Rowdies found room in front of the back four, but passed up on shooting chances from outside the area, selecting to try and work combination plays in the penalty area. In the bad weather, with a slippery ball, it may have been better for the visitors — who are in the thick of the chase for the fourth and final playoff spot — to take some cracks from distance. But, throughout the 90 minutes, only substitute Carlos Preciado tried a shot from distance that forced VanOekel into a save.

“It was different,” VanOekel said of the playing conditions. “The league always gives out those nice colourful balls, but you never think you’re going to use them. When we saw the snow coming yesterday… someone started talking about the orange balls, from the Voits last year and then Under Armour and the yellow ones this year. Wow. It was a different ball. It’s Edmonton, we’re north of the wall. It’s a great result for us. We’re in the playoffs.”

The Boomers played in the NASL in the early 1980s.

FCE owner Tom Fath said that he now owns the Boomers trademark, and to keep it active the Eddies have to use it. So, the reserve team has a Boomers kit.

And why do the Eddies have the trademark? Fath explained that it’s being held for a potential Calgary NASL team down the road. The Eddies have long hoped that a Calgary team would come into the league to help create a rivalry.