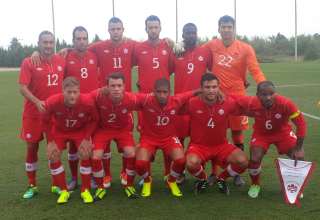 For those of you who don’t know Douglas Adams’s The Hitchhikers Guide to the Galaxy, you may not be familiar the words: ‘Don’t Panic.”

It’s the advice spelled out on the front of the Guide from which the novel gets its name.

Midfielder Julian de Guzman was channeling his inner Adams in his post-game interview on Tuesday after Canada’s 1-0 loss to Mauritania in Oliva, Spain.

“It’s too early to hit the panic button,” de Guzman said as the Mauritanians’ celebration carried over from the field into their dressing room.

“We still have a ways to go and I think we’ll only get better once the core of the team is finally picked out and then there’s a lot more to look forward to.”

It was a game where Canada held a ridiculous advantage in possession, especially in the second half, but somehow picked up the loss when Mauritania scored on what was its only real chance at goal.

Even after Marcel de Jong was sent off late in the first half for his second yellow card in a matter of minutes, Canada was the one turning the screw more often than not. De Jong was perhaps a bit unlucky on the second yellow as there were three Canadians in the area where the foul was committed and, on another day, Simeon Jackson would have received the yellow.

But de Jong had just been given a yellow minutes before and was off with his second.

“It’s tough to go down a man so early. We invested a lot of effort into the first 35 or 45 minutes,” said defender Adam Straith. “We needed to score a goal there to kind of settle ourselves down because we put a lot of energy into the first half.”

After putting a lot of energy into that half only to come up with nothing, one lapse saw Adama Ba latch onto a ball played over the top and come out the winner in the one-on-one duel with Canadian keeper Milan Borjan. An irate Borjan ran to the linesman to argue that the play was offside. He may have had a point, but young defender Jeremy Gagnon-Lapare was a few steps behind his teammates and may have played Ba onside.

It’s small consolation to say that the performance matters more than the result after Canada could only manage a scoreless tie and a 1-0 loss to the 151st-ranked team in the world but, in truth, there is still a long way to go before games that really count.

That said, if someone who can bang in goals on a regular basis doesn’t materialize soon, then Canada will follow the same path it has many times before. The spot is there for someone like Lucas Cavallini or (I know, I know) Junior Hoilett to step in and be the offensive spark Canada has desperately needed for years.

Coach Benito Floro is bringing a new way of playing that will take time to implement. There were signs of what he wants out there against Mauritania.

“I think for us it was a very good game because our aim was to make the most of what we were practicing during the camp,” said Floro. “That’s been done very well for us.“

Floro said he’s pleased with how the team has responded to his methods and the new system he’s bringing to the team. It’s still going to take a few camps before the team really shows its understanding of the system but it all comes back to the same problem that’s plagued Canadian teams.

If Canada can’t score, all the possession in the world won’t help it.

“What was missing was pretty much what’s been missing since a very long time and that’s scoring,” said de Guzman. “Hopefully that’s something that we can work on going into the next couple camps but the purpose of this camp was to get to know how the philosophy of Benito’s football and for the most part I think a lot of the guys were able to pick up on that.”