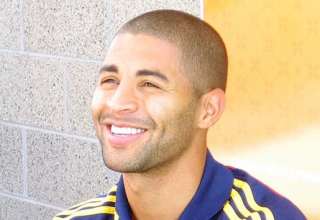 Today, the league announced that it is suspending Real Salt Lake striker Alvaro Saborio for diving.

In June, MLS gave striker Charlie Davies a $1,000 fine after he pratfalled in the penalty area against Real Salt Lake to fool the referee into an undeserved penalty. But when Davies was fined, came the warning that the punishments for diving would be swift and more severe in the future.

Saborio won’t just have to pay a fine; he’ll miss Saturday’s game in Columbus. MLS didn’t announce the suspension till Friday as the players’ union had made an appeal. It was unsuccessful.

In last week’s 4-0 win over San Jose, Saborio dove — earning not only a penalty, but a sending off for Earthquakes defender Bobby Burling. The sending off opened the floodgates, and the goals flew in after that.

MLS is doing the right thing. For years, soccer fans have heard major bodies from FIFA to UEFA to the major European leagues to promise that they will do something about diving. It has only been lip service.

Why? Those leagues and governing bodies don’t want to be in the business of suspending star players. Gutlessness is far more pragmatic.

““As previously stated, all instances of obvious simulation and/or embellishment that directly impact the game will be subject to severe discipline, including fine, suspension or both,” said MLS executive vice-president Nelson Rodriguez and domo of player discipline. “We will continue to impose sanctions, and even increase their level, if necessary, in an attempt to eliminate this type of behaviour.”

The only head scratcher is that MLS stated “The subsequent foul and penalty-kick goal had a direct impact on the match and will impact San Jose’s next match because San Jose defender Bobby Burling was issued a red card on the play.” That’s a clear indication that Burling’s red card won’t be rescinded and that he still has to serve a suspension. That’s the odd part of the justice here. If Saborio was found to have fooled the officials, shouldn’t Burling be allowed to play?