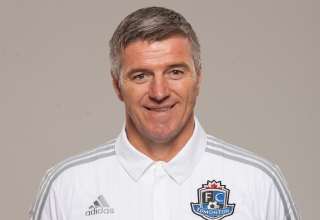 FC Edmonton coach Colin Miller feels this has been the most promising off-season in the club’s history.

One of them is a current international recommended to Miller by a former teammate, while the other is a veteran that Miller said “we jumped on as soon as we knew he was available.”

Miller said the club has been approached by Gustavo’s agent a couple of times. Miller feels the player is a dynamic one, who can come in off the left wing and use his right foot. Miller has opted to use “wrong” footed players on the wings in the past (right footed left wingers and vice versa) because they can shuffle in from the sideline and be ready to shoot. Miller said it also keeps the defending fullback from cheating to one side or the other — he knows his opponent could try to go inside or outside of him.

“Gustavo will be a good outlet player for us,” said Miller. By that, he means Gustavo will be able to take the passes from defenders — no matter if he plays on the left or centrally — and be the conduit to start attacks.

Meanwhile, Ledgerwood is a player Miller has known for a long time, since the current Eddies’ boss was an assistant coach for the national team. From the first time he worked with Ledgerwood, “I was very impressed by his commitment to the national team.”

Miller feels Ledgerwood, being an Alberta native, will be one of the club’s most valuable signings, because his work ethic and passion for Canadian soccer will rub off on the club’s younger players.

As for the status of midfielder Hanson Boakai, whose contract expired at the end of last season, Miller said relationships between the club, the player and the agent remain cordial.

“We have made an offer, and we have a good relationship with Hanson and his agent,” said Miller. “We want to come to an agreement that satisfies the club and the player. But, like any player out of contract, he is looking at his options.”

But, Miller admits if Boakai was to go to an MLS side, “we wouldn’t get a penny for him.”