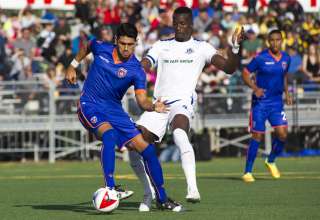 At the start of the season, we were promised a nicer, friendlier NASL. One that would would be less litigious and would play well with its neighbours. After all, despite bleeding teams and being reduced to an eight-club circuit, it got a fairly sizable reprieve when the United States Soccer Federation allowed it to keep Division 2 status.

Well, many of us had heard last week that Miami FC had a major Aug. 2 announcement. The Twitterverse, thanks to a proliferation of wannabe journalists with “sources,” declared that team owner Riccardo Silva was going to partner with the Miami MLS bid.

What Miami FC, along with the lower-division Kingston Stockade FC (a team based in New York state), did is initiate an international legal proceeding targeting FIFA, CONCACAF and the United States Soccer Federation. What do the two clubs want? They have gone to the Court of Arbitration for Sport, claiming that FIFA is violating Swiss law (the body’s headquarters are in Switzerland) by not compelling the USSF to have a system of promotion and relegation between its professional divisions. MLS is Div-1, while USL and NASL are Div-2.

“The claim contends that, unlike the way the game is played throughout the world where results on the pitch define which division a team plays in, American teams are illegitimately blocked from the same opportunity because of the USSF’s failure to follow FIFA’s rules.

“The international soccer federation (FIFA) requires its members to practice promotion and relegation. The claim simply asks the USSF, a FIFA member, to comply with FIFA’s rules. By not practicing promotion and relegation, the United States and Australia are the only two members among FIFA’s 211-member associations that violate this basic rule. In addition to FIFA, CONCACAF and the USSF are named as respondents in the claim.”

So, how does this all affect Canada? Well, we are partners with the USSF in a World Cup bid. Any sort of litigation involving a World Cup-bidding soccer body looks bad. And, while we are in the works of launching our own Canadian Premier League, we currently have teams in MLS, NASL and USL.

But, USSF doesn’t control those Canadian teams. Canada Soccer sanctions the Canadian clubs. What if, by some chance, the legal action is successful? Would promotion and relegation be adopted, but the Canadian clubs immune from it? Could Toronto FC, the Whitecaps and the Montreal Impact, theoretically, finish as the bottom three in the MLS overall table, and all be guaranteed to play in MLS the next season?

As well, there are some issues with the lawsuit. It’s clear that the lawyers haven’t done their homework on how club soccer in CONCACAF works. Below you will find paragraph 48 of their claim. 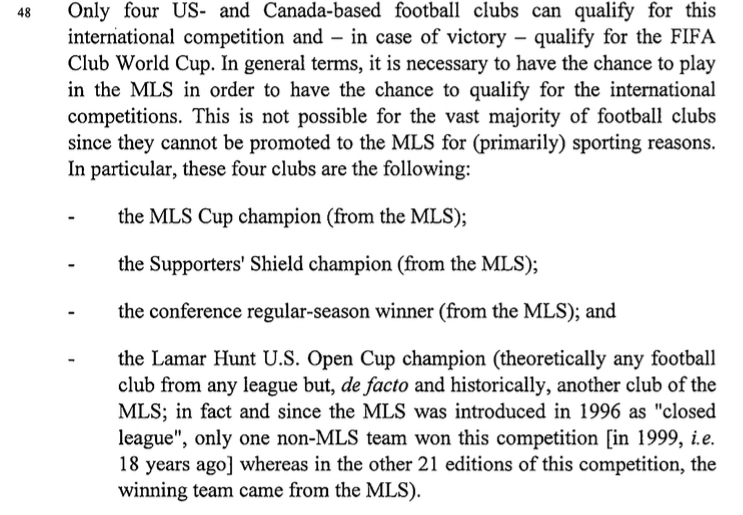 OK, there is so much wrong with this. The United States AND Canada do not have four spots. The United States does, alone. Canada has a single spot unto itself. At this time, Canadian teams cannot qualify for the CONCACAF Champions League out of league play in North America. Canadian teams, at the moment, can only qualify out of the Canadian Championship, which isn’t even mentioned in the paragraphs. Canada Soccer recognizes the Canadian Championship as our official national competition.

It’s actually a pretty big thing for the lawyers to get all wrong. You’re suing the system, but you show that you don’t even know how the system works. It’s sloppy.

But Miami FC owner Riccardo Silva must understand that, with a CONCACAF World Cup bid going forward, a primarily American bid with Canada and Mexico tossed in, that the timing of this action couldn’t be worse for the USSF.

Meanwhile, there are those at the USSF who might be wondering why exactly they gave NASL a break in the first place.

If anything, for Canadian clubs, the messiness of American soccer might be just another reason to embrace having our own system through our own league. If Canadian Premier League President Paul Beirne ever got a better argument why investors should stay away from the hybrid North American system, well I’d like to see it.